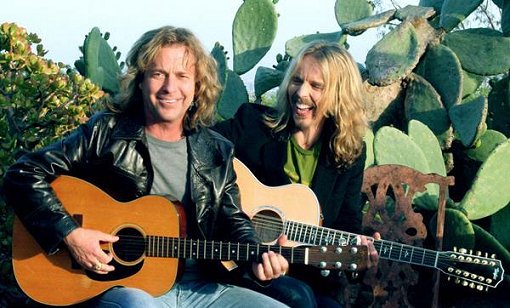 A Shaw / Blades post seemed to be inevitable: seeing them on VH1-Classic one afternoon, hearing them on Howard Stern the following week, and then being approached by a friend, demanding Shaw / Blades exposure on Ickmusic. So here goes…

Jack Blades, formerly of 80’s super hair-pop group Night Ranger, and Tommy Shaw, singer / guitarist for Styx, first joined together as two members of Damn Yankees (along with the Nuge) in 1990. Seventeen years later, the two are still collaborating, as Shaw / Blades. Influence, released in February, is actually their second release. Hallucination

Influence, as the title suggests, is a journey through the classic tunes of yesteryear that influenced the two. They take on tunes by the likes of Buffalo Springfield, the Zombies, and Yes. But they also show their soft sides by covering Orleans, Seals & Crofts, and the Mamas & the Papas. Well actually, soft is a theme throughout the album. They put the soft, smooth, seventies lite-rock twist on every tune on it.

It’s nothing groundbreaking by any means. The covers stay very true to the originals. But it’s … nice. Shaw and Blades are two very down to earth, likeable guys. And they’re sharing the music that means something in their lives. You can’t knock that. And to the fans who have followed them through their careers – like my friend Shannon – it means something to them too.

Shaw/Blades: Time of the Season (mp3) -originally by the Zombies

La Boheme, Act I and II

Start your week right: The Shirelles