This past weekend in Pasadena, the National Council of La Raza’s ALMA Awards took place. Our very active little purple man was there, performing with 11-man Latin juggernaut Grupo Fantasma from Austin, Texas. Things seems to be falling into place for GF. They played with Prince at a Golden Globes aftershow party earlier this year, and had a weekday gig at Prince’s 3121 Club at the Rio in Vegas. This past weekend, not only did they back up Prince at the awards show, and play an aftershow with him in the lobby of the Roosevelt Hotel, but Prince also flew down to Austin to join them at a private party. There’s money well spent. Pay for Grupo Fantasma and get Prince thrown in for free? Not a bad deal.

I’m trying to figure out why Prince is crossing the country at the last minute to play with an 11-man Latin band. I’m convinced that he’s banging one of their sisters or cousins. If there’s one thing we know, it’s that Prince will move mountains for a little poonanny! I mean, didn’t he spend like 6 months in a studio with Kim Basinger convincing her she could sing? 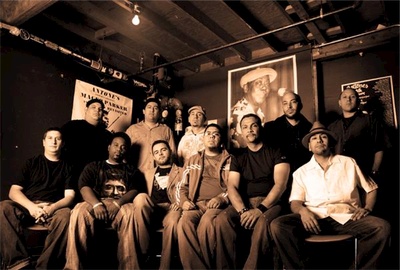 Wilco Video: You Are My Face