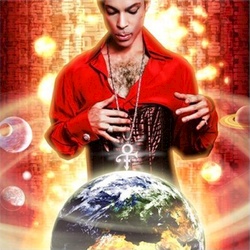 , will be released in the U.S. This past Sunday, British fans could pick up the album by buying an issue of a newspaper, The Daily Mail. Thanks to a fine, upstanding Brit, I got a copy. It’s been on steady rotation here this week, and I thought I’d share my initial thoughts. As with all albums, opinions shift over time. I could feel differently in 2 weeks, 2 months, or 2 years. But this is how Planet Earth sits with me after a few days. Here’s a song by song review….

“Planet Earth” – I take my Prince album openers seriously. Take a look back to the golden era: “Dirty Mind”. “Controversy”. “1999”. “Let’s Go Crazy”. “Around the World in a Day”. “Christopher Tracy’s Parade”. “Sign o the Times.” All became classics, and gave you the feel you were in for something special.

“1999” had its apocalyptic message, but the way Prince dealt with the end of the world was different then, when he wrote the song in his early 20’s: “Everybody’s got a bomb / We could all die any day / But before I’ll let that happen / I’ll dance my life away.” It may be the end of the world, but damned if he’s not gonna party until his dying breath.

On “Planet Earth”, the party’s over, and it’s time to get serious: “Just like the countless bodies / That revolve around the sun / Planet Earth must now come into balance with the one that caused it all to be / Then we’ll see His kingdom come / So shall it be written, so shall it be sung” – Sheesh, too heavy for me. The teachings of Jehovah hath crept into Prince’s pen. Sure, he’s always thrown his brand of religion into the mix, but he used to serve us with equal portions of sex (“Erotic City” vs. “God”). Yeah, I’m one of those who misses dirty ol’ Prince. Not a bad opener, though.

“Guitar” – This song was first offered as a download on Prince’s site (for a fee). Then, another version soon showed up on Verizon’s TV commercials. *sigh* We lose another one. Oh well, we still have Springsteen, who will never sell his art to the advertisers. I have to admit I’m not crazy about “Guitar”. It’s a funny, silly song (“I love you baby, just not like a love my guitar”), but just seems a little bland for my taste.

“Somewhere Here on Earth” – Now we’re talking. This one quickly became a favorite. A classic old school vibe, complete with the sound of a needle hitting the record at the onset. It’s soft, it’s sweet, with muted horns right out of “Adore”. For fans of Prince’s slow jams (‘Insatiable”, “Scandalous”, “Adore”, “Damn U”, etc.), you’ll like this one. Odd lyric: “in this digital age, you could just page me”. Isn’t “paging” more 80’s / 90’s? I guess he couldn’t work “text message” into the mix.

But this is classic falsetto, slow jam Prince. Excellent song.

“The One U Wanna C” – A killer Prince pop song. My other favorite on the album. He has a cool effect going in this one where the guitar sounds like it’s being played underwater. Our boy is back:” U don’t need 2 fix your hair / 4 somebody u don’t care 4 / U don’t need 2 shave your legs / If it ain’t me that’s knocking at your door…. If u wanna get creamy / I’m the one U wanna C”. My only gripe is the fade out during a guitar solo, which just begs for a classic 12″ extended remix.

“Future Baby Mama” – Another slowed down, old school Prince vibe. Sure to make all the future baby mamas swoon. Nice.

“Mr. Goodnight” – “All over the world they call me Prince, but you can call me Mr. Goodnight.” Prince brings back his seductive rap for this one. Another fun one with some interesting lyrics. Case in point: “I got a mind full of good intentions / And a mouth full of Raisinets”. Alrighty.

When I first heard the “rap”, my instincts said “Uh oh.” But I enjoyed it, and it grows on me more each time I hear it.

“All the Midnights in the World” – If you’ve waited for the day you’d hear Prince sing the words “prickly-fingered scallywags”, then your day has come. This one clocks in at under two and a half minutes, the shortest song on the album. The lyrics show this tune has great potential (“Amethyst and rubies / Crystals and black pearls / I’d trade them all, just to spend with U /All the midnights in the world). But in the end it sounds to me like it was thrown together at the last minute.

“Chelsea Rodgers” – The Chelsea Rodgers hype continues to build (her official web site is “coming soon”, but already it’s quickly evolving into an ad for Prince’s new perfume). Is this song another one of Prince’s clever marketing ideas? To announce a new protege with a song written about her? Well if she’s gonna live up to the hype, the song better be funky, right? And funky it is. Cool drum intro, retro-funk bass line, horns. But Prince doesn’t take the lead vocals on this one. There’s a female lead that I’m assuming is Shelby, who joined up with Prince and his gang at the end of last year. She overdoes it on the vocals, particularly during the opening part. It doesn’t ruin the song for me, but it distracts me from what could have been a standout tune on the album. Leaving her out of the mix would have taken this track to the next level.

“Lion of Judah” – The opening guitar chord sounds like “Purple Rain”. The rest of the song is reminiscent of Musicology‘s “A Million Days”. More religious imagery in this tune. “Like the Lion of Judah / I strike my enemies down / As my God is living / Surely the trumpet will sound”. Can you picture a concert crowd singing along to this? Me neither. But this one has the potential to grow on me.

“Resolution” – I remember when the album closers used to knock me out. “Temptation”, “International Lover”, “Sometimes it Snows in April”, not to mention the granddaddy of them all, “Purple Rain”. Yeah, I know it’s not the 80’s any more, but Prince is still Prince, he’s still capable of a solid album closer (and a solid album, I just know it!). But a knock out closer this ain’t. It’s more of a yawn than anything else. “Dropping bombs on each other / In the act of saving face / Tell me now people, how is that resolution?” You get the idea. A noble effort, but just ho-hum to me.

As someone who’s been an avid devourer of Prince’s music since 1984, it’s hard for me not to compare every new Prince album with his 80’s output, the “golden era” of Prince, as many would agree. And it’s ridiculous to think anything Prince puts out will ever rival those albums. It’s a different time, and we’re all different people. But I’ll continue to follow Prince down any path he decides to wander down. He’s still creative, prolific, and at 49 – still one of the very best live performers around.

This is Ryan Shaw