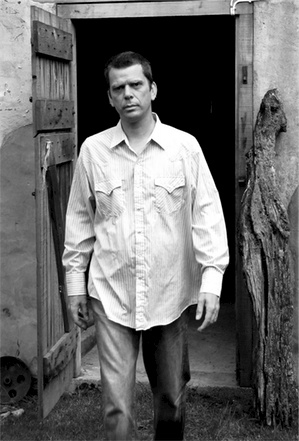 I heard another older song a few weeks ago that’s brand spanking new to me, courtesy of Sirius (where Steve Earle now has his own radio show on Outlaw Country – yipee!). This one is by Jeb Loy Nichols. Jeb made a unique musical journey from Austin, Texas to New York City to London. He’s been based out of the UK for some time now. In 2000, he traveled to Jamaica to record Just What Time It Is, a fusion of soulful pop, reggae, and a little country. The studio engineer was Stephen Stanley (Buju Banton, Burning Spear).

The song will reel a lot of you right in with its infectious sing-along chorus: “come ooon over to my yaard.” La la la la la… It’s a nice one!

Of the song, Jeb writes on his site:

I wrote this after the bulk of the album was already finished. Lorraine and I were cycling through Wadebridge, in North Cornwall, the lyrics came in a tumble, the whole thing was written in twenty minutes. I was pleased with the day, happy to be out of London, I’d recorded a record I liked and I was counting myself lucky. Things were looking up, I was doing what I wanted to do with people I admired, I was out of one thing and into another.

Take a listen (and don’t crap out before the chorus)…

Buy: Just What Time It Is

Whatever Happened to Terence Trent D'Arby?