I’d like to introduce Jon as the newest contributor to Ickmusic. Jon is also from the Phoenix area, and is passionate about a wide range of music (and a long time Bruce fan to boot)…. ladies and gents, say hi to Jon {{Hi Jon}}… – Pete 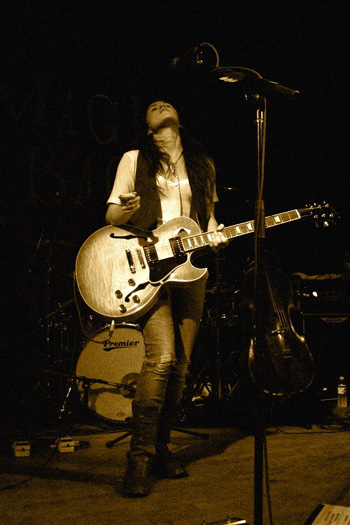 KT Tunstall is ready to do a little rockin’ out. Don’t know if you’d call it “drastic” or flat out “fantastic,” but her new album is urgent in a pleasing and rewarding way.

Perhaps you were like me: you took notice of the passion and novelty of “Black Horse and the Cherry Tree” and you enjoyed its host album Eye to the Telescope in a “this’ll-work-as-background-music” kind of way. You saw the artistry, the voice was clearly there, and you had to admire the craft. But something more could’ve made it better.

With Drastic Fantastic that something is putting pop (and shades of pop-punk) ahead of the folk, creating more riffs and layers and melodies and singing your heart out to top things off. “Little Favours” kicks in with driving beats and furious strumming, and the irresistible toe-tapping doesn’t really stop until track eight. In that span, we get the “Cherry Tree” update and first single “Hold On” along with the second single “Saving My Face.” But even if you’ve heard those two songs, you haven’t heard the best KT has to offer. “I Don’t Want You Now” is a snarl of punk-pop that easily could’ve been found on a defiant early R.E.M. album. “White Bird” dares to tread the ground of the Beatles “Blackbird” and does it successfully. And then there’s “Hopeless,” a shambling crunchy guitar riff that you can’t shake and a pop song that classically twists its premise into a song explicitly about determination and hope and “no more saying there is no more time.”

The street busker is almost gone on this record, but the balladeer returns for the final three frames of “Drastic Fantastic.” The standout among them is “Someday Soon,” a confectionary confessional that works magic on Sunday mornings or any time that’s ripe to “put my words away” and “seek out a little silence.”

An artist named Jen Trynin put out a couple of CDs back in the 90’s and wielded a huge Les Paul on her slight frame while belting out pop lyrics and great riffs. KT probably never heard of her, but on this CD they could be musical sisters. After Trynin and others like her disappeared under the waves of alternative, alterna-crap, rap-rock, emo and indie, it at one point appeared that new pop-rock could only be found in the country music bins. But artists like KT Tunstall seem now to have a different agenda in mind.