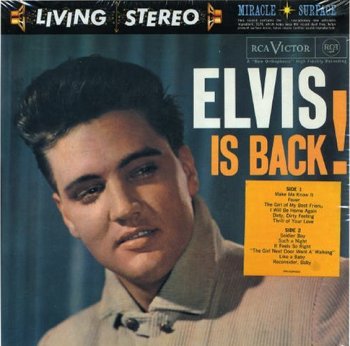 Well, not exactly, but it is his birthday today. The King would have turned 73 today if he had managed to keep that ticker going. But he didn’t. Thankfully, we have the music (and the movies – can I get a Clambake!); and the music never gets old for me. There’s so much that I still haven’t heard.

This past week, I used my iTunes gift card to pick up Elvis is Back! It was his first studio release after returning from his stint in the U.S. Army, where he did his duty and managed to seduce a young Priscilla Beaulieu over in Germany.

In March 1960, Elvis and his gang hit RCA’s Studio B in Nashville. They recorded into April. Musicians included the usual suspects: Scotty Moore on guitar, D.J. Fontana on drums, Bob Moore on bass, and the Jordanaires providing their trademark vocals. Floyd Cramer also played piano on the album. He would hit it big that same year with an instrumental: “Last Date”. You know the tune…

Floyd Cramer – Last Date
So the resulting album from these sessions was Elvis is Back! Now, if you don’t care for Elvis’s music – particularly pre-Hollywood “early Elvis” – I don’t understand you. There’s something so appealing and universal about these songs, that voice. It’s always struck a chord with me, and it looks to have the same effect on my kids. They won’t shake their moneymakers to just any ol’ tune. But when the first chords of an Elvis song plays, their primal instinct is to move – to smile… It’s really a testament – not just to music in general – but to the timelessness of Elvis Presley in his prime.

Happy Birthday to the King!

Buy the remastered version of Elvis is Back! on