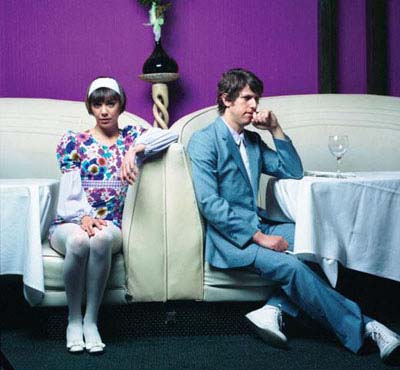 Hello, Ickies. I know I’ve been pretty quiet, sorry about that. Last semester was a doozy, and things have been hectic over the holidays. But I’ve returned!

Today, I give you The Bird and the Bee out of L.A. I first came across this group in late 2006 when I heard their EP again and again and again and again. The EP contained 4 tracks, three of which were slated for their upcoming full length, the fourth a Peaches remix of “Fucking Boyfriend.” I was drawn into the band’s unique sound. Laid back, yet poppy. Indie-ish, yet polished. And a hint of jazz (they are, after all, on Blue Note).

The male component of the duo is Greg Kurstin, formerly of Geggy Tah. Yes, *that* Geggy Tah. But don’t let that turn you off. I promise, The Bird and the Bee are much more sophisticated than their 1996 hit, “Whoever You Are.” The female lead is Inara George, an aspiring actress turned musician.

The group’s 2007 self-titled full length is simply splendid. I’m generally horrible at description, so let’s let the band speak for themselves, eh?

Later in 2007, the band released an EP, Please Clap Your Hands

. The EP carries 5 brand-spankin’ new tracks, all of which are in much the same vein as the self titled album. A particular highlight for me however, is their take on the Bee Gees’ “How Deep is Your Love.” I’ve always liked the song, but this version made me melt.

And it looks like they’re planning another release for 2008. Do these folks sleep?