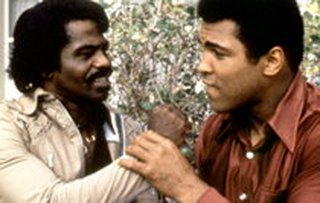 In 1974, a DC-10 took off from the U.S. en route to Kinshasa, Zaire. The Rumble in the Jungle was about to go down – a heavyweight fight between George Foreman and Muhammad Ali. It was Don King’s first big fight as a promoter. To precede the fight, a music festival was planned. So aboard that DC-10, not only were Muhammad Ali and his crew on board, but all of the musicians too. And their gear. And their wardrobe. Making the flight were Bill Withers, B.B. King, the Pointer Sisters, the Jazz Crusaders, Sister Sledge, James Brown and his crew (Fred Wesley, Maceo Parker, and others), and even more musicians.

Brown and his gang were headlining the festival, and as you’ll hear, he and his great band were in prime form. The musicians spent a couple of weeks in Zaire, staying for free in luxury hotels, soaking up the nightlife, and having a great time. As Fred Wesley said in this article he wrote for the Seattle Times, “I think maybe some of the economic problems Zaire is experiencing today are a residual effect of that 1974 music festival.”

DVD: I just Netflixed an Oscar winning documentary about the Rumble in the Jungle, which not only documents the fight, but the music festival as well. It’s called When We Were Kings. You can find out more about it by clicking the DVD cover. I’ll be watching it soon.

Foreman vs. Frazier (1973) -Before George Foreman faced Muhammad Ali in Zaire, he had risen from from the ranks since his gold medal victory at the 1968 Olympics. In 1973, he faced Joe Frazier, completely dominating, with the fight being called in the 2nd round. Check out George Foreman, before the Grill ®.