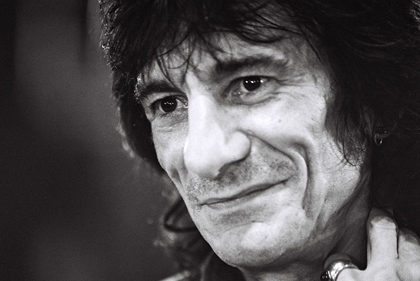 I just wrapped up Ronnie Wood’s autobiography, Ronnie. Now, I consider myself a pretty big Stones fan. Of course, I missed them in their prime (which I consider their career through 1981’s Tattoo You). I didn’t really learn to appreciate them until I was a senior in high school in ’87-’88, when I came of age with albums like Sticky Fingers, Exile on Main Street, and Let It Bleed.

I’ve only seen the Stones live once – high in the nosebleed seats at Tempe’s Sun Devil Stadium during their Bridges of Babylon tour in 1997. The wind was swirling, messing the sound up, and I honestly was too far to get any true enjoyment out of it. Not big on stadium shows am I.

When you start to know a band’s music inside and out, you feel you have a pretty good understanding of their background and roots. But after reading Ronnie’s autobiography, I discovered that I had a lot to learn, and that most of my focus over the years has been on Mick & Keith.

Only over the last couple of years have I started to get into Faces, one of Ronnie’s pre-Stones bands (along with the Jeff Beck Group). And I admit to having no idea that Ronnie has a rich solo catalog, which started with 1974’s I’ve Got My Own Album To Do. Ronnie built a studio in his home at the time, called the Wick (I wish my house was impressive enough to name). This album’s recording took place before Ronnie was in the Stones, but he had already befriended Mick and especially Keith. So they show up on the album, as do Mick Taylor, Rod Stewart, Pete Townshend, and even George Harrison, for crying out loud.

One of the amazing things about the British music scene in the late 60’s and early 70’s is that every musician seemed to know eachother – it was a pretty tight knit club . They also knew eachother’s girlfriends. Pattie Boyd, who was married to George Harrison, and would go on to marry Eric Clapton, actually dated Ronnie in between. Ronnie tells some incredible stories about he and Harrison openly cavorting with eachother’s wives. Pattie Boyd must’ve been something – look at the songs she inspired: “Wonderful Tonight”, “Layla”, and “Something”.

If you want an entertaining read, and want some great behind the scenes stories from a legendary musician – not to mention an accomplished artist – check this book out. Obviously, Ronnie is not without his demons. The book details his struggles with cocaine and alcohol – a struggle which continues to this day. Ronnie’s currently in rehab in Woking, England. And the tabloids say he may leave Jo – his wife of 30 odd years – for a 19 year old Russian waitress. No, you can’t make this shit up.

Underneath all the vices though, is a sweet, funny, talented man. And it shines right through in the book. The guy is/was friends with seemingly everyone: from Slash to Kate Moss to Tony Curtis to John Belushi (who tried his best to steal Jo away from Ronnie).

So here’s one from his first album. You’ll hear Faces bandmate Rod Stewart singing background. I’m really enjoying this album. It’s like unearthing a hidden Stones/Faces hybrid. And over the coming weeks, I’ll be picking up the rest of his solo albums.

Check Ronnie out on Amazon:

Any recommendations for top-notch music autobiographies?