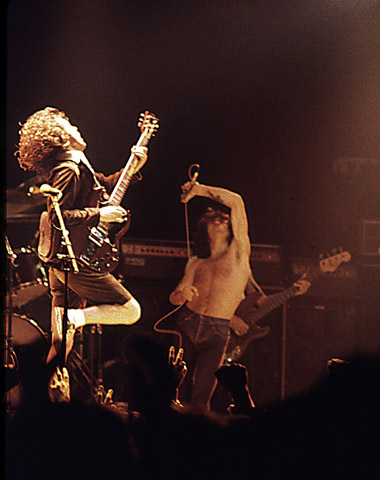 I realized something yesterday. Or actually I re-realized it. “Highway to Hell” is extremely gratifying to the soul when played at a very loud volume – which happened yesterday at work (earphones on, of course). I work in a techy environment where a lot of us often choose to plug into our tunes and get our work done. I’d love to have an electronic ticker up on the wall streaming all the the music playing at any one time around the office. It would make for an interesting study, wouldn’t it? Or am I really a geek? Don’t answer. Let’s move on.

So these are rough times in these United States – the financial world in turmoil, hurricanes, gun-toting Alaskan hockey moms, dead patches of grass in my front yard – it’s enough to make one wonder if we are indeed on the highway to hell (in a hand basket).

It’s live shows like this that can help get some of the aggressions out, and escape for a bit, if you will. We reach back here to 1979 when Bon Scott was still AC/DC’s lead singer. I won’t pretend to be an AC/DC aficionado, but I do know that I love ‘Back in Black‘, ‘Highway to Hell‘, and ‘Dirty Deeds Done Dirt Cheap‘ (great memories of listening to “Big Balls” as a guffawing 10-year old). Mr. Scott sadly left us in 1980, dying from acute alcohol poisoning after a night out in London town.

Enjoy every moment people. For it’s times like these when you need to go back to basics and Let There Be Rock!

Unless your head’s been under a rock, you’ve picked probably picked up on AC/DC’s media blitz to promote their new album and tour, called Black Ice…