Welcome to week II of my Ick’s Pick series – 52 weeks of hot new album action! My pick for the second “release Tuesday” of the year comes from the Derek Trucks Band. Derek Trucks is the nephew of original Allman Brothers Band drummer Butch Trucks, so grew up very musically inclined, to say the least. The “Derek” was in tribute to Derek and the Dominos, the blues-rock group put together by Eric Clapton, and whose album included the slide guitar work of Duane Allman. Derek was drawn to the slide guitar at an early age, and by the age of 11 or 12, was playing gigs in his hometown of Jacksonville, Florida. 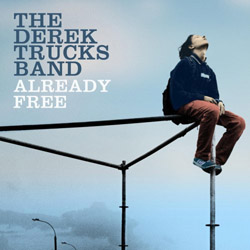 Derek’s all of 29 years old now, and is already releasing his 7th album with the Derek Trucks Band – Already Free (his first DTB album was released in 1997, when he was 18 years old).

I’ve seen the Allman Brothers a handful of times, and only knew of Derek through his association with the band (he has toured and played in the band over the years). But I’d never taken the time to track down his work with his own band. So in listening to Already Free, there’s an instant familiarity, but at the same time, a sense of wonder at how mature and accomplished Derek and the band sound.

The album features some guests, including another guitar whiz, Doyle Bramhall II (he and Derek have been playing a lot with Clapton the last couple years), and Derek’s wife, blues singer/guitarist Susan Tedeschi.

Standout tracks for me include the album opener, a gritty cover of Dylan’s “Down in the Flood”; “Maybe This Time”, which features Bramhall on guitar; “Don’t Miss Me”, one of the many tracks featuring DTB vocalist Mike Mattison, with some great blues riffs and tempo changes;  but my favorite out of the gate is “Sweet Inspiration” – a song written by Memphis/Muscle Shoals songwriters Dan Penn and Spooner Oldham (hear them do it). It’s a raucous and joyful gospel rave up, and it’ll have you dancing around the house. The Hammond B-3 intro sounds straight off the Stax label; and the combination of Mattison and Tedeschi’s harmonies, Derek’s slide guitar, the B3, and the amazing percussion work come together for 4 minutes and 39 seconds of halle-frickin-lujah! Track it down.

The Mellowness of the Shug