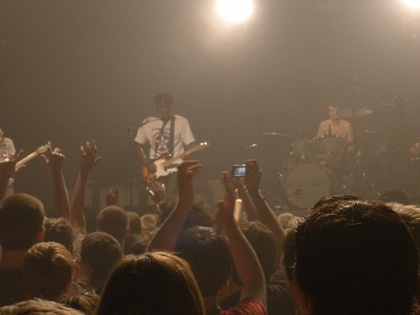 Kele Okereke shouted this from the stage last night from First Avenue right after they finished their opening number, “One Month Off” from their new album Intimacy. One month off indeed. Bloc Party was originally scheduled to play 1st Ave on March 30th in what was to be the kick off for my six date Brit Rock Spring Wank with gentle ball cupping (Keane and Doves still to come). When they canceled due to Kele losing his voice, I checked their tour schedule to see if they could swing back through at a later time. I saw several dates in Canada and since we are basically part of that country, I thought it still could happen.

And it was bloody marvelous. 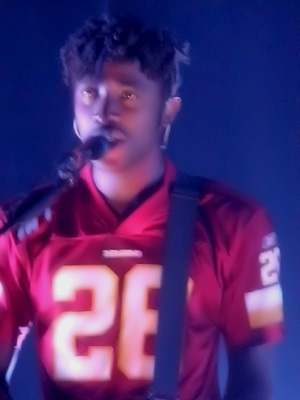 Right off the bat one could see that the boys in the band felt bad for missing us on the original date. Kele promised a thunderous AND extended set. They fucking delivered playing nearly all of their new album and several tracks from their first two albums. Since I missed them the first and only other time they came through in 2005, it was great to hear them play “Blue Light”, “Like Eating Glass” and “Positive Tension” from Silent Alarm; and “Flux” from A Weekend in the City really got the pit swaying around.

In addition to fantastic performances of “Mercury”, “Ares” and “The Prayer”, Kele and the rest of the lads charmed the crowd… carrying on conversations with people in the audience, flirting with girls (natch!) and chastising people for walking out during the encore which saw “She’s Hearing Voices” tacked on just for us Minneapolitans.

This last bit prompted Kele to say, “Alright, that’s it! I’m coming out there.” And he did…gloriously allowing all of us to body pass him around the pit and eventually to stage left where he proceeded to run up the steps to the upper level! He paused  on the area of the steps that has always been known to elicit cries from staff saying, “You can’t stand here, dude!” Well, he not only stood there, but found a woman to dance with – continuing to run around all areas of the club with the roadie following behind him, frantically trying to give him more slack on the mic cable.

Sure I would’ve liked to hear “Biko” from the new record and my fave Bloc Party tune “Tulips” (a shiver and a sigh), but the energy from the band and the crowd more than made up for it. Sadly, this is the last North American show for Bloc Party. They are off to Europe though, so all you Ickmusic readers there should go to see them. It will be a corker!

Ick's Pick (Week XVIII): The New York Dolls - 'Cause I Sez So