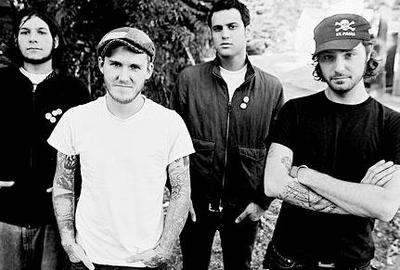 For the second time in just 6 months, the Phoenix area was treated last night to the bare-bones rapid-fire majesty that is the Gaslight Anthem. The guys have been touring their asses off in 2009, with two swings around the US, and a successful European festival season highlighted by a couple of guest appearances by Bruce Springsteen on “The ’59 Sound” (at Glastonbury and Hard Rock Calling). Their work ethic is paying off, it seems. The buzz continues to build, and I felt a noticeable difference in the vibe between last night’s show at Scottsdale’s Martini Ranch, and April’s show at Tempe’s Clubhouse. The atmosphere felt more electric last night – the crowd was alive, vibrant, singing along, pumping their fists; and the venue is more colorful and inviting than the dungeon-like Clubhouse. It was my first show there, and any reluctance I had about venturing into the belly of the beast that is Scottsdale was quickly put to rest.

My brother and I (6’3″ and 6’4″) respectively, got a good position stage right – much to the disappointment of those behind us. Sorry folks, we staked our claim. Move along, nothing to see here.

The set was standard fare for the Gaslight Anthem. That’s no knock on them – it’s just that with two full albums and an EP to draw from – you have a good idea which songs are coming. But there’s nothing standard about their performance. The charisma and charm of front man Brian Fallon leads the charge…

(no “Meet Me By The River’s Edge” their most direct tribute to the Boss), and they drew a handful from their debut Sink or Swim

, and their EP Senor and the Queen

. I’m most familiar with The ’59 Sound, and what was astounding to me was how familiar the crowd was with their older material. I love the fact that there’s a fan base like this locally – lingering under the radar – and emerging for great live experiences like this.

Sound-wise, my only gripe is that Fallon’s mic could have been louder and more crisp – the vocals weren’t too clear at times. Then again, we were in front of the bass amp, so Alex Levine’s bass lines were washing over us pretty intensely.

The highlights for me came in the form of “The ’59 Sound”, which really turned me on to the band when they performed it on Letterman early this year; the “Stand By Me” intro into “I’da Called You Woody, Joe”, which is Fallon’s ode to Joe Strummer and the Clash; I love the driving force of “The Patient Ferris Wheel”; and one of Gaslight’s few ballads, “Here’s Lookin’ At You, Kid”. I know it’s hard to pull off live, but I wish Fallon would sing it in the lower register like he does on the album – it’s such a bittersweet tune.

The Gaslight Anthem continue their hectic touring schedule. If you’re in North America, odds are they’ll be in your neighborhood by the end of the year. Check out the tour dates here. Check out a great band on an upward trajectory. There are great things to come from these guys.

High Lonesome
Casanova, Baby!
Old White Lincoln
Even Cowgirls Get The Blues
The ’59 Sound
We Came To Dance
Film Noir
Miles Davis & The Cool
The Patient Ferris Wheel
Stand by Me intro >
I’da Called You Woody, Joe
Angry Johnny And The Radio >
If I Had a Boat [Lyle Lovett]
Great Expectations
Here’s Lookin’ At You, Kid
The Backseat

Blue Jeans and White T-Shirts
Wherefore Are Thou, Elvis?
Senor and the Queen
We’re Getting A Divorce, You Keep The Dinner