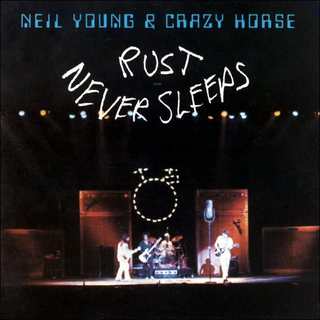 A couple weeks back, I finally got a couple of good CD display cabinets, mounted them on the wall, and released my CD’s from years of exile in plastic storage bins. It’s nice to have them in my face again, and it’s making me revisit a lot of favorites from my past that haven’t yet made it to the iTunes rip machine.

One such CD is Neil Young & Crazy Horse‘s Rust Never Sleeps, which I initially bought because of my love for the song “Powderfinger”. But upon listening to it recently, it was the beautiful lyrics, intense imagery and the simple & sweet melody of “Thrasher” that hit me.

The amazing lyrics have undoubtedly been absorbed and closely studied by longtime fans of Neil, but I’m still trying to wrap my head around them – even just the last few lines:

Where the vulture glides descending
On an asphalt highway bending
Thru libraries and museums, galaxies and stars
Down the windy halls of friendship
To the rose clipped by the bullwhip
The motel of lost companions
Waits with heated pool and bar.

But me I’m not stopping there,
Got my own row left to hoe
Just another line in the field of time
When the thrashers comes, I’ll be stuck in the sun
Like the dinosaurs in shrines
But I’ll know the time has come
To give what’s mine.

There’s magic in those words. And the sort of melancholy, matter of fact style in which Neil sings it…  Wow… Such a good tune…

So Much World Outside The Door...