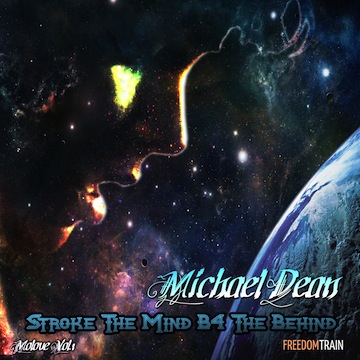 Followers of the Funk, lend me your ears. You won’t be sorry…

Friend of Ickmusic and fellow avid Prince fan Michael Dean not only runs one of the coolest funk-centric sites on the web (Freedom Train), but the man is clearly a talented funk-man in his own right. I have to admit, I was pretty floored when I listened to his brand new album, ‘Stroke the Mind B4 The Behind’.

Like the purple man from Minneapolis, Michael produces, arranges, composes and performs everything you hear. As for the content, it had me from the start. “Kingdom”, which leads off the record, hooked me in with the insatiably funky groove. The handclaps, the synths, the sly exchange between Michael and his guest lady friend.

For you Prince fanatics, tell me that Michael’s vocals – especially on “Kingdom” – don’t remind you a little of André Cymone?

I’m impressed. Every track has something good: a little techno on “She Was a Problem”; the Four Loko funk of “I’m Coo”; slowed down R&B on “Epic Fail”; the 80’s new-wave soul of the title track (speaking of Mr. Cymone).

It’s like Michael takes everything we love about that Minneapolis sound in its prime and updates it for 2011. I’ve already listened to Michael’s joint more times than Planet Earth

Buy the Stroke the Mind B4 The Behind digital album for only $0.99. That’s a buck, funk lovers. Just do it.

And be sure to check out Michael’s ongoing series of Prince podcasts on Freedom Train.