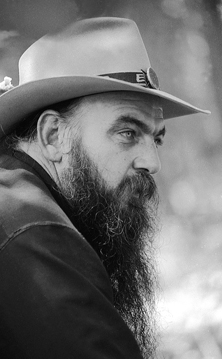 I watched a great Austin City Limits last night: John Prine and Amos Lee. During Prine’s set, he introduced his last song as one “that just about knocked me off my chair” when he first heard it. It was a song called “Clay Pigeons” by Blaze Foley. The song about knocked me off my couch last night too; a heart-wrenching, beautifully written song. It’s on John’s latest CD, ‘Fair & Square’, which I own, but it had never hit me like that before. It’s in the Texas singer songwriter vein, the finger-pickin’ akin to Townes van Zandt (a friend and hero of Blaze).

So I went a searching to find out more about Blaze Foley. Well, like a lot of talents, he died young at the age of 39 years old in 1989. He was shot to death apparently while defending an elderly friend of his. He was a very eccentric, hard living character (he had a strange fixation with duct tape, so much so that his coffin was duct taped at his funeral). He spent most of the 70’s and 80’s playing gigs in Houston, New Orleans, and Austin. But he didn’t leave behind much of a body of work. A couple of albums were released after his death. One of them was ‘Live at the Austin Outhouse’, which was recorded on December 18th, 1988 (his 39th birthday), about three months before his death.

So I have to thank John Prine, not only for his music, but for mentioning Blaze Foley, one of the hidden stars of Texas music, another one who faded away much too fast.