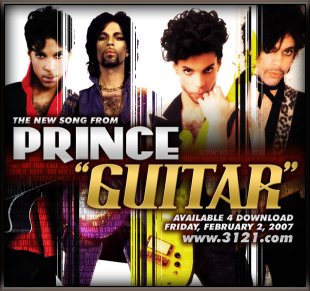 Okay, well, it very well may be morphing into Prince week here on Ickmusic. I was pleasantly surprised when I turned on Howard Stern this morning to hear them listening to some new Prince tracks. They were listening to (and talking over, for the most part) two new covers: “All Along the Watchtower” and “The Best of You” (a Foo Fighters tune).

Sounds pretty cool, though I can’t really see Prince pulling out either of these songs for the Super Bowl performance. But who knows?

Also, as you can see on top, Prince will be releasing a brand new tune called “Guitar” on Friday morning through his web site, 3121.com. An album may not be far behind.

I think Friday is also the day he is scheduled to perform at a press conference. A flurry of activity in the little fella’s world! Sweet!