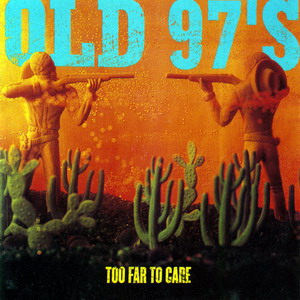 Where are the Old 97’s? I know they have some tour dates scheduled, but we haven’t seen any new studio stuff since 2004, when they released their debut on New West Records, Drag It Up

. The formerly Dallas-based band has released some gems over the years, my favorite still being 1997’s Too Far to Care

. Fusing country, punk, rockabilly, and later on more of a pop oriented sound, the Old 97’s really shine on the stage. These guys put on an amazing live show. An energetic and spastic live show. A late 90’s Old 97’s show at Nita’s Hideaway in Tempe is one of my live music highlights.

The guys are apparently still together, though I need to figure out if a new album is in the works. They left Texas a while ago. I believe lead singer Rhett Miller still lives in NYC (Rhett lived right near ground zero with his girlfriend on 9/11/2001), and bassist and singer Murray Hammond lives in L.A.

Though they have an arsenal of barnstorming, shit-kicking songs that will knock your pants off and have you hopping around like Hee Haw’s Grandpa Jones, I especially enjoy the slowed down Old 97’s. Here are a couple of great down-tempo Old 97’s tunes…