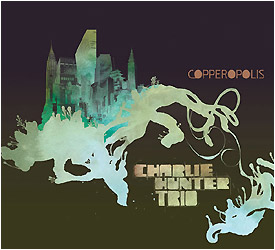 Who would’ve thought that three months after getting a brand spanking new, $2000 Apple iMac, that the most reliable computer in the house would be my 3 year old Dell? You know the ad with the cool Mac guy and the geeky Windows guy? The way I feel right now, I’d punch the smirking Mac guy in the face and take Mr. Windows out for beers. My Mac has been nothing but trouble since day one: freezing up with the “spinning beach ball of death” at random times, and lately, some programs deciding just not to open. FRUSTRATING! So after months of troubleshooting with the Apple folks, I’m off to an appointment with an Apple “genius” tonight over at the local Apple store. Meanwhile, hello XP, old friend… (Not how a new Apple owner is supposed to behave, is it?). Make it right, Mr. Jobs!

So thanks for enduring my whining, and on to the music. Bay area 8-string guitar wiz Charlie Hunter has been featured here before. The trio – Charlie on guitar, John Ellis on tenor sax, bass and wurlitzer, and Derrek Phillips on drums – move beyond a mere jazz trio, infusing ample doses of funk and rock. Charlie is also a big Prince fan too, so he gets bonus points right away from me.

Here’s one I heard recently on Sirius, off of last year’s Trio release, Copperopolis. Take in some laid back, Middle funkin’ Eastern style.

Motorhead on The Young Ones