Here’s a brief recap of my first day at ACL: Friday, September 14th….

Jesse Malin – my bro and I walked in part way into Jesse’s set. Jesse gets instant cred in my book because he pulled the Boss in to his new album to sing “Broken Radio” with him. He’s got the east coast pure rock n’ roll vibe going, and he delivered with his set. One of those acts that I need to see in a small club. I’ll be catching him next time he hits Phoenix. 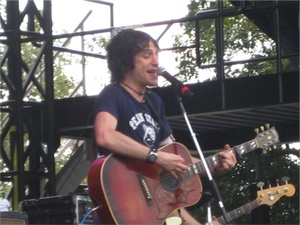 Joseph Arthur & the Lonely Astronauts – far be it from me to be a superficial, “typical male”, but the bass player for Joseph Arthur & the Lonely Astronauts enhanced the show for me. Her name is Sybil Buck, turns out she’s a model for Yves St. Laurent, and she shakes and shimmies like she stepped out of a Robert Palmer video. The Astronauts set was a favorite of both my brother and I. Buck and the other female in the group, killer lead guitarist Jen Turner, laid down some sweet harmonies – making some of the tunes sound very ethereal and even Pixies-like at times. A great set, and it made me re-listen to their latest release, Let’s Just Be

, with a new appreciation. Hail hail Joseph & the Astronauts… 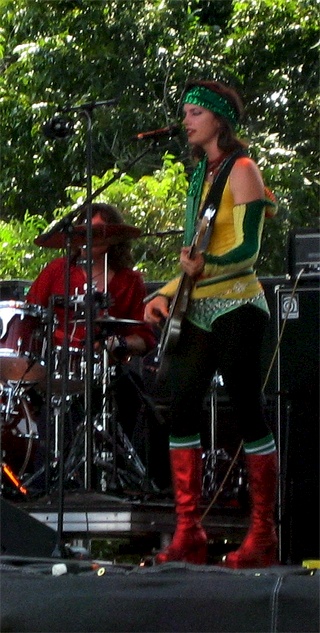 Will Hoge – the mid-afternoon, post fire set by Will Hoge at the Austin Venures stage was a nice well kept secret among the throngs at the festival. A relatively small crowd got treated to some down home rock n roll, often reminiscent of the Black Crowes (at least to these ears). Hoge even busted out some trademark Chris Robinson moves at times, complete with some handclaps and mic-stand staggers. Good set. 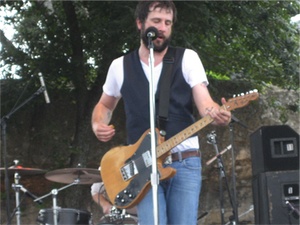 Blonde Redhead -We only caught a couple songs before getting positioned for Crowded House, but what I did hear sounded interesting. I’ll have to dig into some of their stuff.

Crowded House – my bro’s highlight of the weekend was seeing Crowded House, who he hadn’t seen since the early 90’s in Minneapolis. It was my first time seeing Neil Finn, Nick Seymour and the band. It was a solid, tight set that was the last of their six week North American tour. Hearing familiar tunes like “Weather With You” and “Don’t Dream It’s Over” was mighty nice. 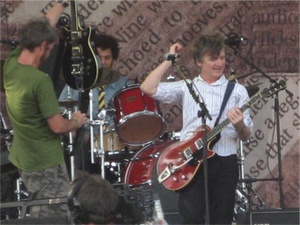 M.I.A. – We were stuck behind the soundboard for Maya’s packed set, so we cut it a bit short after a few songs. But I watched some video screen action of M.I.A. and her dance partner jump around to the likes of “Bucky Done Gun”, “Sunshowers”, “Boyz”, and “World Town”. I should’ve pre-positioned myself for this one, if you know what I mean (huh?)… 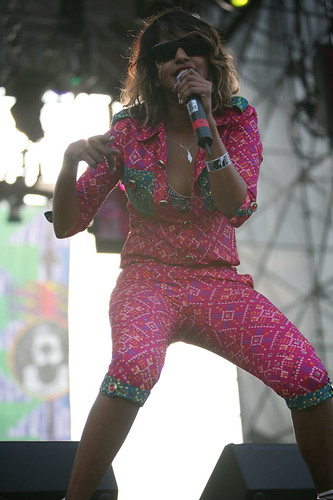 Spoon – okay we were about 2 football fields back and I laid down and closed my eyes for a while, then we were off to see the Kaiser Chiefs. But I did hear some cool tunes off the new album, Ga Ga Ga Ga Ga

Kaiser Chiefs – These guys tore it up. All I really needed was “I Predict a Riot”, in which lead singer Ricky Wilson scaled the scaffolding, came down, jumped around, and then proceeded to twist his ankle. That didn’t dampen his spirits though. He hopped around on one leg for the remainder of the show; a set list filled with high energy British rock from start to finish.

Reverend Horton Heat – I’ve seen the Rev a multitude of times over the years, so it wasn’t a priority to catch the whole set. But we did manage to catch the last several tunes, which gave us “Psychobilly Freakout”, “Bales of Cocaine”, “It’s Martini Time”, Black Sabbath’s “Paranoid”, “Greensleeves”, and “Folsom Prison Blues”. It’s always good to see the Rev and his Gretsch, Jimbo and his stand up bass, and their latest drummer.

The Killers (from a diiistaaance) – We gave it a shot, but couldn’t get anywhere near the stage. So I can’t say I truly got to take in any of the Killers. We decided to head out.