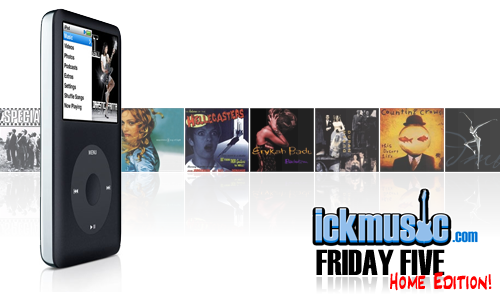 My wife and I are in the midst of home improvements and the iPod and iTunes have been providing the soundtrack. In honor of my current project I set up the following smart playlist in iTunes (I’m including this in case any of the faithful fivers want to play along at home:

I was pretty surprised by the number of tracks that came up (just over 300). And thus the first ‘themed’ Friday Five is born. Last week the fearless fivers picked up my slack by bringing it, this week I’m giving back with this very special edition of the Friday Five.

I came across City and Colour while I was working in Toronto a few years ago. The acoustic side project (and polar opposite) of Alexisonfire front man Dallas Green really resonated deeply with me when I first heard the track “Save Your Scissors” on MuchMusic (that’s the Canadian version of MTV for those who are not aware). I highly recommend this record to just about everyone.

I remember reading an article last year where John Legend was talking about how much Jeff Buckley influenced him. This track, to me, is one example of where I can hear that influence. Stark and honest this is as close to topical as Legend comes and the delivery is without doubt heartfelt.

In the early 90’s I had a friend who worked A&R at Warner Records and he introduced me to Francis Dunnery. To this day I still pull this record out at least once every other month and it feels as fresh and vital as it did the first day I listened to it.

This to me has all the makings of a classic Springsteen track. Topical without beating you over the head, great lyrical hook and a healthy dose of Jersey shore imagery. “Long Walk Home” is without a doubt one of my favorites from Magic.

From New Jersey’s favorite son to another New Jersey native with a penchant for writing beautiful and moving songs. When I said in my review of Let it Go that it felt like home, this was the song that earned it that description. There is something familiar and warm not just to the timbre of Jon’s voice, but the song itself in the way it wraps around you and lifts you up.

So what’s taking you home today?