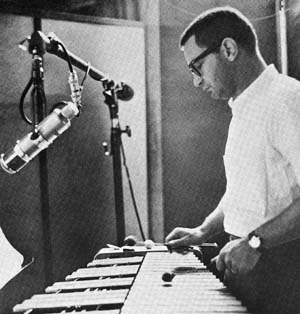 Here’s some mokin’ hot latin jazz from a virtuoso of the vibes, Cal Tjader. I wasn’t familiar with Tjader until I heard his live Cuban Fantasy album sometime last year, but the man was a vital component of the Bay Area jazz scene in the 50’s and 60’s, starting out in the Dave Brubeck Octet.

Hooking up with George Shearing’s popular quintet in the early 50’s, coupled with the mambo craze of that time, turned Tjader on to the Latin jazz sound, which he would perform straight through to his death in 1982. Carlos Santana counts Tjader as one of his biggest influences.

I’m no jazz aficionado, but this album, like I said, smokes. Here’s a hot one…