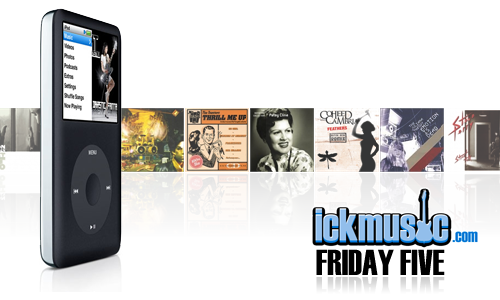 “Winter Hill” (mp3) by Doves (from Kingdom of Rust)

I’ve listened to this record quite a few times and it’s yet to leave any lasting impression on me beyond “the lead singer (Jimi Goodwin) sounds like a cross between Chris Martin of Coldplay and Kele Okereke of Bloc Party.” Overall it’s a solid indie rock record that I’m sure will grow on me, it’s just not there yet.

“Oh! Darling” by The Beatles (from Abbey Road)

Wringing every bit of soul his slight British frame could muster, “Oh! Darling” is as close to 50’s Rhythm & Blues (à la Fats Domino) as Paul McCartney and The Beatles could manage. In a 1980 Playboy interview John Lennon said of the song “‘Oh! Darling’ was a great one of Paul’s that he didn’t sing too well. I always thought I could have done it better – it was more my style than his. He wrote it, so what the hell, he’s going to sing it.” It’s hard not to agree as John clearly had the more soulful voice.

The mentor and the apprentice, though to call Tommy Emmanuel an apprentice is like calling Kobe Bryant an ‘okay’ basketball player. This entire record is a celebration of the style that the legendary Chet Atkins loved and championed his entire career. It’s fitting that this would be his final recording before passing in 2001. This specific tune has a ‘club jazz’ feel and is beautifully orchestrated.

“Talkin’ ‘Bout a Revolution” (mp3) by Afro Fiesta (from Playing for Change: Songs Around the World)

By now I’m sure that you’ve all seen the video produced by the group of filmmakers who compiled buskers, street performers, choirs and the odd (and frankly out of place) superstar (yes, I’m looking at you Bono) from around the world and worked them into a single performance of “Stand by Me” (Pete posted it a while back). The group has released a record, the proceeds of which will go to the Playing for Change Foundation (Official Site) whose mission is simply “building and connecting music/art schools around the world” which is certainly a worthwhile cause. The album itself falls a little flat in places without the visual aspect to support it, but not to worry as there is a DVD included capturing the performances. This particular performance stood out to me and is one of my favorites from the record.

That’s it for me, what’s next on your shuffle?