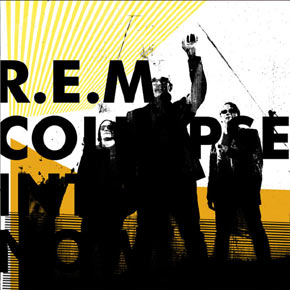 Every couple of years it happens. Each time I think it will be different. My expectations are high and, as I listen, I lie to myself. “This is the one. It’s good. Finally, they are back.”

But it’s not the one. It’s not good. And they aren’t back.

Before we take a look at Collapse Into Now, the new disc from R.E.M, let’s briefly review their catalog and rate them on a 10 point scale.

Chronic Town (1982)- Fun loving and brilliant first volley. 9
Murmur (1983)-The timeless classic. 10
Reckoning (1984)- The one that proved they had width of vision. One of the many soundtracks to my senior year. Goofed off with them at their Summer Fest show in Milwaukee in July 1984. My friend Matt wouldn’t give Michael Stipe any of his bbq ribs. Matt was very possessive of his food. 10
Fables of the Reconstruction (1985)– Straddling the next level with authority. 9
Life’s Rich Pageant (1986)– The “lost” underrated one. 8
Document (1987)– Indie fame and more achieved. “End of the World” and “The One I Love” played endlessly in every dorm room everywhere for several generations of college students. 9
Green (1988)-The calm (meaning they were still an alt college kept secret) before the storm. 8
Out Of Time (1991)– Boom! 8
Automatic For The People (1992)– Still Boom! Almost like Disc 2 of Out of Time. 7
Monster (1995)– My favorite R.E.M. album. Why? Because it proved that they were still relevant and could grow beyond their signature sound. Such a great record. 10
New Adventures in Hi-Fi (1997)– The beginning of the decline. 5
Up (1998)– No. Absolutely not. Never. 2 (simply due to the warmth of the glow from the previous efforts).
Reveal (2001)-A slight return…almost a tease but still a 6
Around The Sun (2004)– And back to sleep again. 4
Accelerate (2008)…into what exactly? More snoring? 4

And that brings us to their latest disc. Again, we have critics saying this is their “Comeback” but in three years when their next disc comes out, this one will suck and that future one will be the “Comeback.”

I don’t get Peter Buck. How can he make such a great record with Tired Pony and then go back to boring the shit out of me with a new R.E.M. album. Maybe they need a Brit in their band to make it right. More importantly, does Michael Stipe have anything relevant to say anymore? I don’t think so. In the 80s, he was so youthful and fun. R.E.M has such a different sound to everything that was coming out back then that is was so fresh and different. In the 90s, when they achieved “god like genius” status, they epitomized that decade. But that’s just it….they were (and still are) soooo 90s…the faux hippie shit…the “sharing time”…the film Point Break…in so many ways it was the suckiest decade. I know, I know….how can that be, Mark? With Blur, Oasis, The Verve, and Stereophonics all launching that decade? Well, those bands (and a few others) were my saving grace in a decade that truly gargled my balls from a sociocultural and contextual standpoint.

And that’s why Collapse Into Now is another 4. “Überlin” is worth a download because it addresses the struggles of middle age. At least Stipe here is writing about things that matter and are relevant in the year 2011. And stylistically it does bring a hearty whiff back of the greatness that was once R.E.M. But the rest of the tracks aren’t really there at all.

So, now we begin the countdown to the next album in around three years in which the same thing will happen all over again. Super!