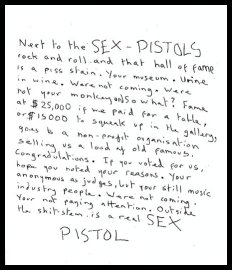 I just caught John Lydon (AKA Johnny Rotten) on Jimmy Kimmel Live a few nights ago. He is one entertaining and honest guy. He was ranting about the Sex Pistols induction into the Rock & Roll Hall of Fame. In a nutshell, eh, they ain’t goin’. Though they’ve been history for a long time, it’s admirable that a band so anti-establishment has stuck to their principles so many years later, and not bowed down to the “system”.

Cheers to them for causing a little stir… here’s my favorite Sex Pistols song.

Here’s the letter written to the Hall of Fame, thought to be John Lydon’s handwriting (Link to John Lydon’s Official Site with a larger image of the letter):

Next to the SEX PISTOLS rock and roll and that hall of fame is a piss stain. Your museum. Urine in wine. Were not your monkey and so what? Fame at $25,000 if we paid for a table or $15,000 to squeak up in the gallery, goes to a non-profit organization selling us a load of old famous. Congradulations. If you voted for us, I hope you noted your reasons. Your anonymous as judges. but your still music industry people. Were not coming. Your not paying attention. Outside the shit-stem is a real SEX PISTOL.