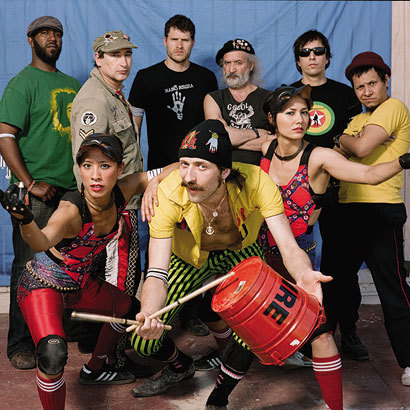 Gogol Bordello was high on my list of must-see acts at the ACL festival a couple weeks ago. Like a lot of people, I first came to know of them during Madonna’s performance at Live Earth last summer (7/7/07). She brought guitarist and lead singer Eugene Hütz and violinist Sergey Ryabtsev out to join her for “La Isla Bonita”. If you were able to ignore Madge’s annoying backup dancers, you got a glimpse of these two eccentrics, and they spurred you into finding out more about them.

The original members of Gogol Bordello met at a Russian wedding in Vermont in 1997. From there, they played up and down the isle of Manhattan and, in the process,  got banned from the Mercury Lounge, CB/GB, Fez and the Bowery Ballroom for “being too over the mothefucking top”.

They set up residence at a performance art space called PIZDETZ, on the lower east side. Eventually, they ended up at Menahata, a Bulgarian bar, also on the lower east side, where their weekly gig. ‘DRINK LOCALLY! FUCK GLOBALLY!’, put them through the roof, and turned Menahata into the CBGB of the Gypsy Punk scene.

A couple months before ACL, I picked up Gypsy Punks: Underdog World Strike, their second album. The album, coupled with some good YouTube festival footage, got me primed for the show. On Friday afternoon at 4:30, the opening day of ACL, Gogol Bordello took the AT&T stage, and Entertainment ensued.

I could watch frontman Eugene Hütz all damn day – such manic energy, and that great Eastern European accent flavoring his lyrics. But then there’s the seven others, including Sergey on violin, an accordion player, and Elizabeth and Pamela, the two crazy-sexy dancers who leaped and bounded to all ends of the stage.

The ACL program put it best: if you like the Clash, the Pogues, and the Gypsy Kings, then you’re in for a treat. They tour all over the world now, so get out and see ’em!

Here are a couple of my (and my two daughters’) favorites:

Gogol Bordello – I Would Never Wanna Be Young Again (mp3)