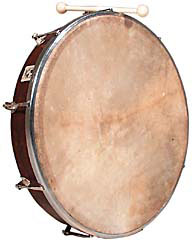 St. Patty’s Day, our adopted amateur drinking holiday, is upon us again. Gone are the days when I took a day off from work to meet my friends at Murphy’s Irish Pub before noon, and stuff my face with corned beef and cabbage and a multitude of Guinness pints. The family man can’t negotiate great outings like that any longer. My St. Patty’s Day will most likely consist of a pint or two after work with some friends, then back home with a 4-pack of those tall Guinness cans (or Murphy’s Irish Stout if I can find it).

Michael Senft of The Arizona Republic (our major newspaper here in Arizona) wrote a good article on the local Irish music scene here in the Phoenix area (which is surprisingly strong). There was a cool little side article describing all of the instruments used in Irish music. So in the “Did You Know?” department, here they are:

The instruments of Irish music

Every week on Sirius Disorder, there’s a show hosted by Black 47‘s Larry Kirwan called Celtic Crush. It’s 3 hours of great Irish music interspersed with anecdotes and commentary by Larry. Last week’s show included a song by Sharon Shannon and Dessie O’Halloran called “Say You Love Me”. Larry talked about how it reminded him of the great country Irish dance halls of the 60’s and 70’s. They were very structured, in that the band would always play 3 fast songs, and 3 slow ones (I think those were the numbers). The fast songs would be spent searching for the girl or guy of your dreams. and the slow songs allowed them to get better acquainted, and for the guys to try to seal the deal. In between the fast songs, girls would line up on one side, and guys on the other. When the bandleader uttered the right words, the race was on for the guys to rush over and ask a girl to dance. There were a lot of “no”s involved (Kirwan was the recipient of a lot of them), but if the fates allowed, love would blossom in the Irish countryside (or at least one quality one night stand!).

As for the song itself, it’s one of those that you hum to yourself for the next couple of days. O’Halloran’s vocals are great, raw and unique. Sharon Shannon is a master of the accordion and the fiddle, and both are featured in this tune. This’ll put a pep in your step…

Have a safe St. Patrick’s Day, wherever you are. If you’re going to start drinking before noon, don’t forget to boil the breakfast early…

A Longer Dose of Computer Blues