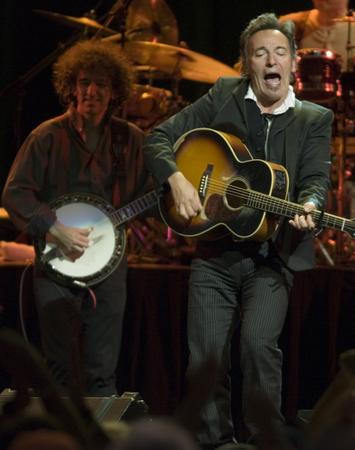 Music lovers, whether you’ve enjoyed Bruce Springsteen’s work in the past or not, go see this show when it stops through your town. Seeing Bruce and his 17 piece Seeger Sessions band tear through those great old songs last night was something to behold, and never to be forgotten. It’s a total assault on the senses: juke-joint, carnival, revival, you name it… 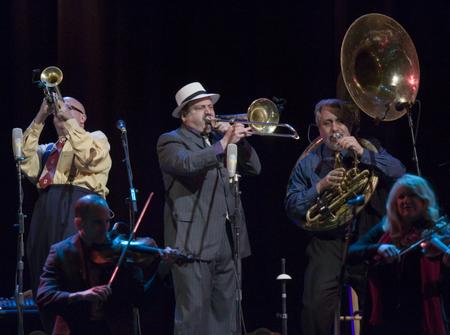 A favorite part of the show for me was THE HORN SECTION: Eddie Manion on sax, Richie “La Bamba” Rosenberg on trombone, Mark Pender on trumpet, and Art Baron on tuba. Those guys in many ways made the show for me. The songs are teeming with life without them, but add them to the mix, and it’s goosebump time. Amazing. They’d parade around the stage, dance jigs and circles around eachother, point their instruments at the drummer and wail… man, it was something to see. If (or when) Bruce tours with the E Street Band again, they HAVE to come along.

Other highlights were Greg Liszt’s banjo, and Marc Anthony Thompson’s vocals. Marc joined Bruce on “Eyes on the Prize” and the closer, the bittersweet and emotional “When the Saints Go Marching In.” He has an amazing voice, low, raspy and soulful. Look for a feature on him in the weeks ahead.

Liszt was great on the banjo, and comes across as quite a character. He’s got a big poofy fro’, and has a cool, laid back stage presence. If you’re familiar with Phish, he reminded me of bass player Mike Gordon with his stage mannerisms. Great stuff. Liszt is in a band called Crooked Still. Look for a feature on them in the weeks ahead too. You can see Liszt open “Jesse James” on AOL Music. They already have the video up from last night’s show.

And on to Bruce himself. It was such a kick to see him having such a genuinely good time. How could you not, leading a band like that, unleashing those great songs in such fashion? I’ve been listening to the bootlegs of the tour so far, and l’ve listened to the CD a bunch of times, but nothing compares to experiencing this music live. Of the set list (listed below), highlights for me were: the opener “Atlantic City”, “Open All Night” (reworked like some sort of 50’s rock n roll sock hop revival), the Tex-Mex, polka infused “Ramrod”, “Saints”, and of course “Pay Me My Money Down”, which wasn’t the same without our 2 and a half year old. She demands to hear it or see it on DVD every single day. She knows it as “Me Me”. “Me Me Dada, Me Me!!”.

I’ll leave you with their New Orleans performance of “When the Saints go Marching In”, as Bruce and Mark Anthony Thompson trade the vocals. Like I said folks, anyone who loves music should make it a point to see this show.