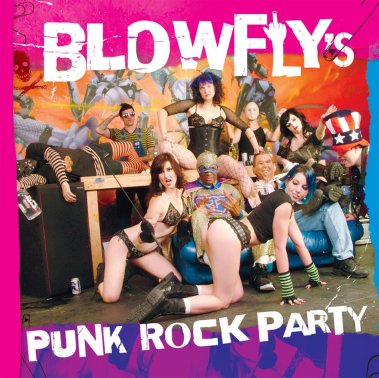 Let’s have some fun, huh? Who wants to get down in person with the original “dirty mouth of the South?” Look out, because Blowfly is coming to your town, and I’ve got two tickets to give away, along with an advance copy of ‘Punk Rock Party’ (not out until September 12), and a Blowfly t-shirt to boot.

‘Punk Rock Party’ will be released on Jello Biafra’s label, Alternative Tentacles. Blowfly’s M.O. is “dirty” remakes of well known tunes. On this album, he takes on punk classics like the Dead Kennedys’ “Holiday in Cambodia”, reworked as “R. Kelly in Cambodia” (with guest vocals by Jello himself), the Ramones’ “I Wanna be Sedated” (which morphs into “I Wanna Be Fellated” – lol), and my personal fave, an updated Clash classic, “Should I Lay this Big Fat Ho?”.

Blowfly is actually 61 year old Clarence Reid, who was a songwriter for many R&B acts of the 60’s and 70’s (Sam & Dave, KC and the Sunshine Band). His knack for making funny (and obscene) versions of others’ songs led him to adopt his alter ego, Blowfly. His debut album, ‘The Weird World of Blowfly’, was released way back in 1971. Since then, dressed in full on superhero getup, Blowfly has released more than two dozen completely tasteless and vulgar versions of many popular tunes. I’m not about to repeat the song titles here, but if you’re ready for a laugh (and you’re an adult who’s not easily offended fer crying out loud), check out his discography on All Music, and be disgusted and amused by the song titles.

Blowfly: Punk Rock Party Megamix (mp3) – includes “Should I Lay This Big Fat Ho”, “I Wanna Be Fellated”, “Playing with Myself”, “R. Kelly in Cambodia”

I’m going out on a limb and guessing that his live show is one entertaining, smut-funkin’ affair. This I gotta see! I’ll be checking Blowfly out at the Clubhouse in Tempe when he hits town in September.

Okay, we’ll have three winners here. Here are the prizes:

Click here to see the trivia question, and to submit your answer.

Here are the tour dates: 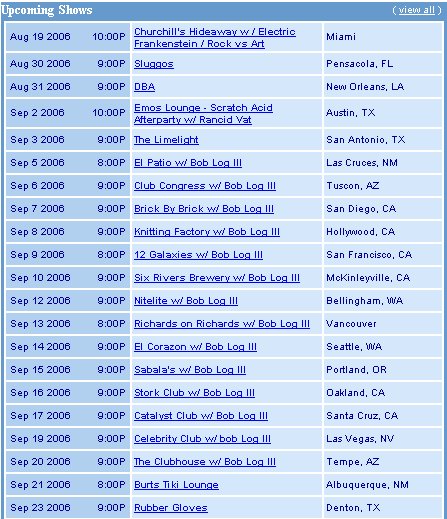