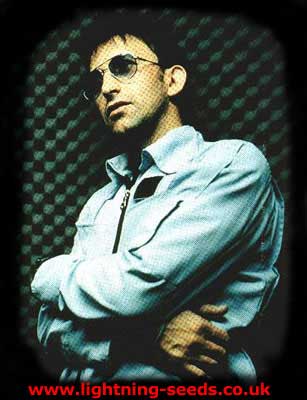 My seven month old daughter has mastered the art of the “walker”, as we call it. You know, the little wheeled seats you can plop your infant in so they can scramble around the house with wild abandon. My daughter’s getting pretty good: 360’s, circling the kitchen island at lightning speeds, and now selecting music for you, the Ickmusic reader.

Her latest thing is to stop by my CD racks in the morning, select one CD, and place it on her little table on the walker. Obviously, I see it as a sign that she is itching to contribute to her pop’s music blog. So tonight, her first two selections…

The first CD she picked was Cloudcuckooland, by the Lightning Seeds. This 1990 album’s biggest hit was “Pure”. If you don’t think you know it, I bet it’ll sound familiar to a lot of you. Great song, nice catchy electronic pop. The Lightning Seeds were originally a one man outfit. It was the brainchild of Ian Broudie (born in Liverpool, England).

I once read that the name ‘Lightning Seeds’ comes from Prince’s “Raspberry Beret”: “the thunder drowns out what the lightning sees”. Ian liked the sounds of that, morphed it into ‘Lightning Seeds’, and the rest is history.

My daughter’s second pick was a Stone Roses CD single for “Fool’s Gold”. They broke big out of Manchester, England in the late 80’s. The founding members were vocalist Ian Brown and guitarist John Squire.

So it’s clear to me that my 7 month old daughter was focusing on late 80’s / early 90’s British music, containing founding members with the name Ian. Brilliant!

Speaking of brilliant, I have always believed this song to be just that: a brilliant 10 minutes of trippy Manchester funkitude.

Ok, one little picture of my little one. Can’t resist…

Leave a Reply to B2 Cancel reply