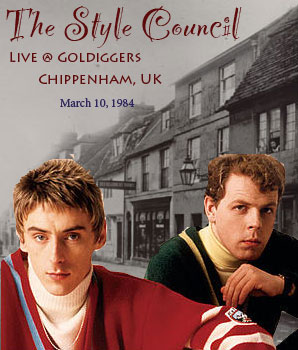 We’re just over a month away from Paul Weller’s new album 22 Dreams (on Yep Roc), which I really look forward to hearing. I thought I’d take a trip back to his great blue-eyed British soul band of the 80’s, The Style Council. Wanting to incorporate R&B, soul, and jazz into his songwriting, Weller had walked away from his pioneering, mod-revival band The Jam in 1982, at their peak, and formed the Style Council in 1983. The Style Council sort of fizzled out by the end of the decade, but Weller has continued on with a strong solo career as sort of the Mod Godfather of the British music scene.

This is the kind of show that accompanies a nice sunny day, a cool breeze, and a nice lemonade (preferably spiked) on the front porch. No day time front porch action for me, by the way. High of 102 on Sunday, and 106 on Monday. And heeere we go. Another summer in the Sonoran Desert.

JamBonus → Oh, also, a blog synergy bonus: Steve at Maybe We Ain’t That Young Anymore has a sweet Jam show from 1980.

Check out some Weller goodies…