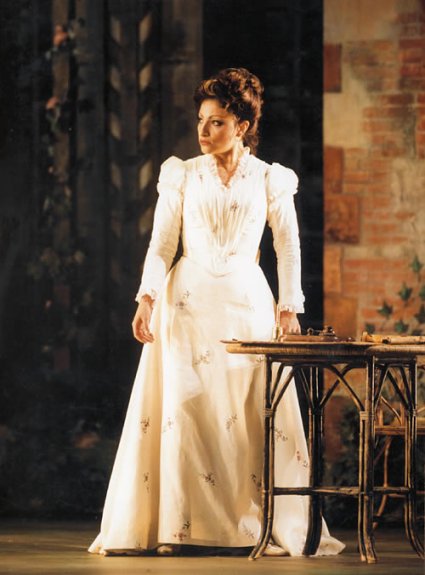 Cristina Gallardo-Domâs, soprano who plays Mimi in this performance (I’m not sure which character / opera the photo is from).

And so here we have Acts III and IV of La Boheme. I’m glad to see some enthusiasm about the recent opera posts. I’ve had these arias going through my head all week. The cool thing about opera – and I’ll lump classical music into this observation too – is the history behind it. La Boheme debuted in 1896. Isn’t it pretty amazing to consider that people like you and me have been enjoying these arias for the last 111 years? Think about some of the classical composers. Their music has been touching people for hundreds of years. Hundreds. What a legacy to leave behind.

The crazy thing is that people a couple hundred years from now will be looking back at our era with the same historical perspective and amazement. There will be some kid in the year 2307 hearing Hendrix, Miles, Dylan, Prince, and Springsteen for the first time. And Sanjaya of course (I hope you all did your part and voted tonight). Something tells me that a religion will soon form based on the life’s work of the Great Sanjaya. It is beyond our control, I’m afraid. For now, we vote. Sanjaya will not be stopped.

So enjoy Act’s III and IV. I’ll have to track down a performance of Madame Butterfly for some near future opera action.