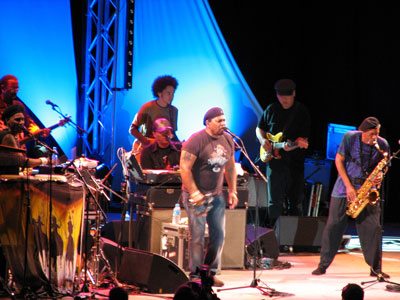 Now we’re getting to the really fun part. I’m excited as hell to say that I’m gonna see the Neville Brothers on Friday! As I mentioned in another post, I saw them at a cool festival in May 1996 called Laguna Seca Daze at the Laguna Seca Race track in Monterey, California (a festival that also included a “Being There”-era Wilco). I remember a really amazing moment as they were playing a version of the Dead’s “Fire on the Mountain” as the sun was setting (nope, not “Fire on the Bayou”). There were rolling green hills behind the stage, and around the bend on a distant hill road came a red fire truck with lights on and the faint sound of the siren. Amazing imagery (pfffffffssstt – pass it on!). Mindblowing dude! 😉

So where do you even start with the Nevilles? They are an institution in their hometown of New Orleans. Brothers Ivan, Aaron, Cyril, Art and Charles released their first record as the Neville Brothers in 1977 (self-titled). The brothers were active prior to that. Most notably, Art was a founding member of soul/funk pioneers the Meters. For a full bio, check out their site. So thirty years later, here they are still going strong, touring as ambassadors for their suffering city. As New Orleans Jazz Fest kicks off this weekend, I’ll have the honor of catching the Nevilles here in my home, Arizona. I consider myself very privileged.