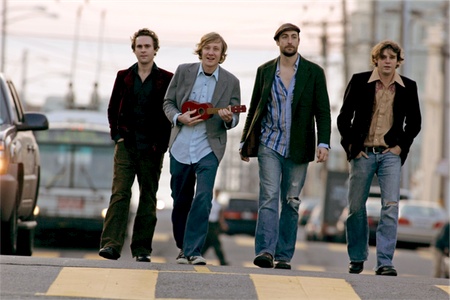 Third to take the stage at this Friday’s McDowell Mountain Music Festival is San Francisco jam band Tea Leaf Green. I was trying to get a chat lined up with the guys prior to the festival, but it looks doubtful considering they’re busy on the road, and I waited until only a week before the festival to get in touch with them. But look for something in the near future.

Anyhoo, the boys in Tea Leaf Green are made up of keyboardist/vocalist/ and main songwriter Trevor Garrod, guitarist/vocalist Josh Clark, bass man Ben Chambers, and drummer Scott Rager. They’ve been going strong in northern California since the late 90’s, and have really built up a loyal and growing fanbase through their live performances. They caught the attention of Phish’s Trey Anastasio, who brought them out on the road to open for him. They’ve since opened for Gov’t Mule, Dave Matthews Band, and Bruce Hornsby.

TLF has gone from playing the small clubs (including Tempe’s former dive bar with a heart, the Sail Inn) to selling out San Francisco’s Fillmore in a few short years. I’m waiting for my eMusic monthly downloads to roll over to pick up some of their stuff, but I did grab a few off their latest, Rock ‘n’ Roll Band, which was recorded live at Boulder, Colorado’s Fox Theater in 2006. The release also includes an accompanying DVD, which I’ll have to check out.

I’m really looking forward to checking them out on Friday. Here’s a kick ass introduction to Tea Leaf Green, a 10-minute journey through power jam goodness…