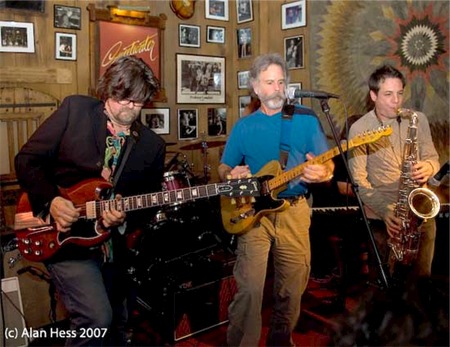 Headlining the McDowell Mountain Music Festival tomorrow night is Bob Weir and his band Ratdog. The band originally formed as a side project for Bob and his friend Rob Wasserman. They picked up former Primus drummer Jay Lane and guitar / harmonica player Matthew Kelly and hit the road in 1995. For those that don’t know, Bob Weir was the rhythm guitar player and founding member of the Grateful Dead (did I need to mention that?). Ratdog’s songbook has consisted primarily of Dead tunes, Weir solo tunes, and the wealth of Bob Dylan tunes that the Dead also enjoyed playing over their 30 year career. Only Bob and Jay Lane remain from the original Ratdog lineup (Wasserman left in 2003), but they’re still going strong. This summer, they’ll be touring the U.S. with jam-guitar man Keller Williams.

Judging by a Weir interview I read in the local paper today, I can look forward to seeing some Ratdog / Neville Brothers collaborations tomorrow night. Did I mention I’m excited?