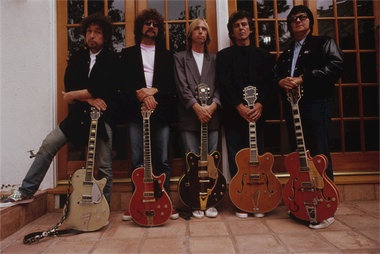 Attention Wilburys fans… Today, Rhino released The Wilburys Collection, a 2-CD / 1-DVD set which contains both Wilburys albums (Vol. 1 and Vol. 3), four bonus tracks (“Maxine”, “Like a Ship”, Nobody’s Child”, and “Runaway”), and a DVD of five videos and a 24 minute documentary “The History of the Traveling Wilburys”.

Here’s a little snippet from the press release about how the Wilburys came about:

George Harrison needed a B-side song to accompany a European single release from his widely regarded Cloud Nine album. While in Los Angeles, George approached Jeff Lynne for help with the B-side, since he had co-produced the album. It happened that Jeff was working with Roy Orbison on the upcoming Mystery Girl album. Roy readily agreed to lend a hand in the musical effort. As fate would luckily dictate, George’s guitar was at Tom Petty’s house, and he too offered to join in and make some music. When the group showed up to record, Dylan also lent a hand to help complete the half-finished song George had written. George has often been quoted as saying, “And so everybody was there and I thought, I’m not gonna just sing it myself, I’ve got Roy Orbison standing there. I’m gonna write a bit for Roy to sing. And then, as it progressed, then I started doing the vocals and I just thought I might as well push it a bit and get Tom and Bob to sing the bridge.” The final result was a song called “Handle With Care.” George later said, “I liked the song and the way that it turned out with all these people on it so much that I just carried it around in my pocket for ages thinking, well what can I do with this thing? And the only thing to do I could think of was do another nine. Make an album.”

Both albums are fantastic, as many of you know. Have a listen to the eCard, check out the album on the Rhino site or iTunes, join the Listening Party … do your thing….

Check out the collection on

A nudge in the right direction