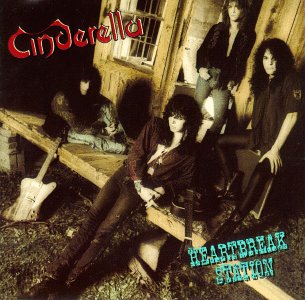 Do not lump Cinderella in with the rest of the 80’s hair bands. Sure, they hit it big with a classic power ballad “Don’t Know What You Got (Till It’s Gone)” – still a great song, by the way. But beneath the hair and makeup was a great blues rock band. Their best effort, in my opinion, was 1990’s Heartbreak Station. It was their third studio release (following Night Songs and Long Cold Winter). They abandoned a lot of the over-produced hair rock sounds of their previous records for more of a bluesy, rootsy sound. There’s some great songs on this one. The most popular is “Shelter Me” – a Black Crowes-y number that rocks it with the gospel-like backing vocals. My favorite, though, is their ode to good old rock n’ roll. It’s an uplifting, spirited song. A great rhythm, great acoustic guitars & mandolin… seventeen years later, the tune still sounds as fresh and vibrant as ever.

And as idealistic and corny at is seems, this song perfectly describes my lifelong obsession and affection towards music.

Cinderella – One for Rock and Roll (mp3)

Good friends and original members Tom Kiefer and Eric Brittingham are still active as Cinderella. Their MySpace and Official Site are still referring to last year’s tour dates, but keep your eye out.

Motorhead on The Young Ones