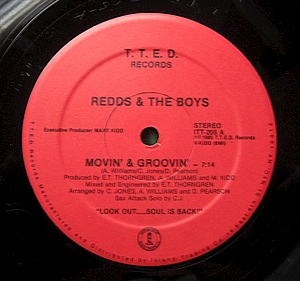 The in-laws came through on my birthday a couple days ago: an Ion USB turntable! The vinyl resurrection can now continue. One of the first to get the treatment yesterday was “Movin’ and Groovin'” by Redds and the Boys.

Go-go music has its roots in the Washington D.C. area, going back to the 70’s, when Chuck Brown was credited with creating the genre. It’s basically rhythm-percussion heavy funk. In the 80’s, Chris Blackwell, the Island Records head, heard Chuck Brown, and brought him and a lot of other D.C. area go-go bands in through Island subsidiary 4th & Broadway and T.T.E.D. records. Blackwell signed Brown, E.U., Trouble Funk, and Redds & the Boys.

E.U. probably had the biggest U.S. hit of the bunch: “Da Butt”, which was written by Marcus Miller for Spike Lee’s movie School Daze.

Here’s a clip of Redds & the Boys performing the song in the 1986 movie Good to Go . The movie was envisioned by Blackwell to be a go-go version of The Harder They Come

, but didn’t quite turn out that way. Co-director Don Letts was let go about half-way through. Letts directed the Clash documentary Westway to the World

, and was a founding member of Big Audio Dynamite with Mick Jones.