Pete and I must have had a cross country mind meld, as I swear the post you are about to read was started on my laptop late Friday night. 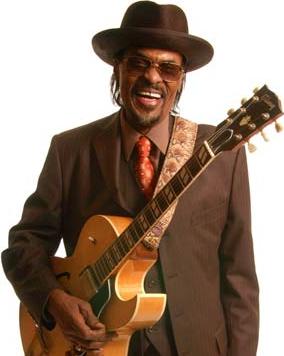 My first exposure to Chuck Brown came earlier this year in the way of an interview with Mike Scott (Prince, Justin Timberlake) in Guitar Player magazine. While the good Rev. Scott gave utmost props to his former band leader he also spoke in great detail about “The Godfather of Go-Go” and how he shaped his sound growing up in D.C. I ran out and picked up “The Best of Chuck Brown” and immediately understood how. Take equal parts funk and Latin music, mix in a dash of soul and new jack swing (way before it’s time) and you’ve got the recipe for yet more break-filled music to move your rump.

Check out a handful of tracks, and if you don’t tap your foot, nod your head and wiggle in your chair upon listening, check your pulse!

Chuck Brown – The Love Theme From “The Godfather” (mp3)

Here’s Chuck’s performance (With his band The Soul Searchers) of “We Need Some Money” from the 1986 movie Good To Go.

Buy: We’re About the Business | The Best of Chuck Brown