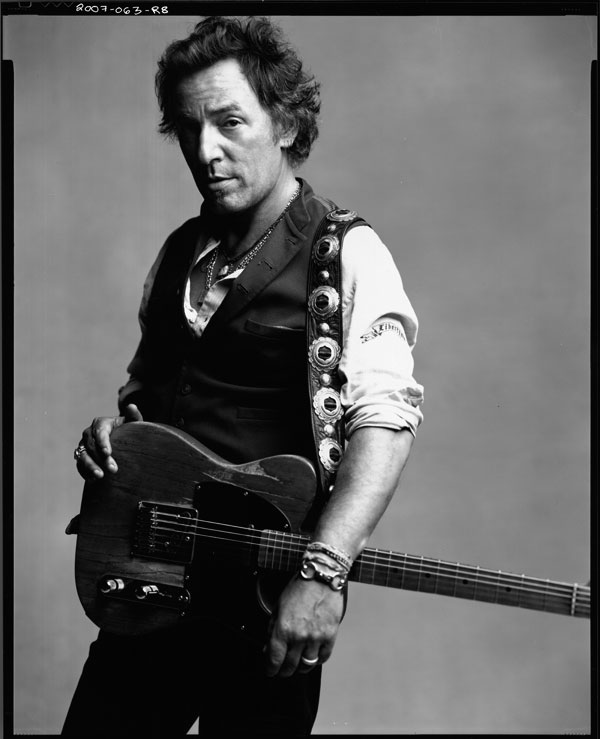 It’s official. Springsteen’s first album with the E Street Band since 2002’s The Rising drops in less than seven weeks, and it’s called Magic. In case that title makes you, like us, think of Doug Henning… click the Mark Seliger photo at right for a first peek at Bruce’s 2007 look. No rainbows or unicorns to be found. (And that guitar… that’s magic.)

According to manager Jon Landau, quoted in today’s press release from Shore Fire Media, this one’s a rocker: “Magic is a high energy rock CD. It’s light on its feet, incredibly well played by Bruce and the members of the E Street Band, and, as always, has plenty to say. It’s also immensely entertaining. Magic is the third collaboration between Bruce and Brendan O’Brien and is a culmination of their very productive creative relationship.”

O’Brien produced and mixed the album at his home base in Atlanta, Southern Tracks Recording Studio.

Of these, only “Long Walk Home” has been heard before; Springsteen debuted the song with the Sessions Band and played it live exactly once, in London on November 11, 2006 (reportedly the day after he wrote it).

Bet on “Radio Nowhere” as the first of these tracks we’ll get to hear. When, exactly, remains to be seen — stay tuned.

I think my feelings are best summed up by this Pointer Sisters lyric in the voice of a young William Shatner: “I’m so excited, and… I just… can’t hide it! I’m about to lose control… and… I think I like it!!”

What the Kids are Listening to: Beautiful Girls