Here’s the last of the Austin City Limits Festival recaps: Day Three comin’ at ya!

Yo La Tengo – This was the perfect way to kick off the day. We had a late Denny’s breakfast, with a couple cups of coffee. It turned out that no caffeine was needed, though. The Yo La Tengo wall of sound tore through us like a jet engine. We showed up in time to hear their take on the Beach Boys’ “Little Honda”, one of my faves from their ’97 album, I Can Hear the Heart Beating As One. 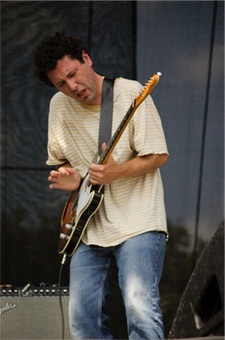 The jet engine experience came during the last song of their set , as the trio tore into “The Story of Yo La Tango” [yes “Tango”]. It was fun to watch Ira Kaplan enter “the zone” during these feedback and distortion frenzies. Georgia Hubley, Kaplan’s wife, kept the rhythm, and burly bassist James McNew laid down those steady bass lines that made my first live – albeit brief – Yo La Tengo experience a memorable one.

The Story of Yo La Tango (mp3)

Here they are doing “Pass the Hatchet, I Think I’m Goodkind” at ACL..

The National – We caught the first few songs from Brooklyn’s The National. The only exposure I really have to them is through their latest album, The Boxer. I picked it up on eMusic a few months ago. Matt Berninger’s vocals remind me of that Peter Murphy type vibe. I got to hear my favorite, “Slow Show”.

Sound Tribe Sector Nine – I wish I could have seen the full set by electronic jam band STS9. I may be wrong, but I think they’re all instrumental, right? We only dropped by for a couple – late in the set – and we already felt like we were late to the party, so off we went….

Ben Kweller – ..We saw the first three or four tunes of Ben’s set. Ben’s got some chops on guitar, and he had the power trio thing going too. He’s 26, but looks like he’s under 20 (form a distance). He has some great rock star moves, thrashing and flailing about like a red-maned 21st century Leif Garrett. There was an overabundance of upper teen-aged girls there for his set, too – which I had no problem with at all, mind you. But alas, my bro and I were soon off to our next musical adventure…

Here’s Ben slowing it down with “Old Hat”…

Grace Potter & the Nocturnals – We only caught a couple of tunes this time around, but my wife and I enjoyed a Grace & the Nocturnals set back in April at the McDowell Mountain Music Festival here in Arizona. So we had enough time to catch her on the Hammond B3, and rockin’ the Flying V front and center. Talented singer and a talented band. But… I don’t know. I just don’t get a”WOW” out of the experience like a lot of others do. 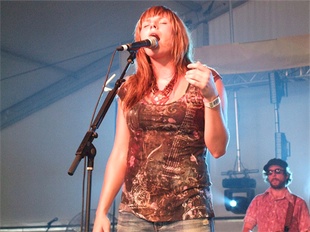 Common – One of the two full sets of the day that we caught was Common. I’ve seen a few hip hop shows in my day – well, pre-90’s hip-hop that is. The last hip-show I probably saw the “Jam ’88 Tour”- which was LL Cool J , Public Enemy, Whodini, and Run D.M.C (among some others that I can’t remember).

But it was worth the wait, because Common is one of the few hip-hop artists today that I can enjoy. Kanye’s a huge talent, but just too much of an ass. Others I hear are just too cliche – money, violence, misogyny.. it’s been played out for a while now. I’m sure there’s a ton out there I would like if given the chance though. 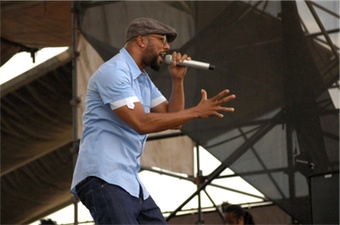 Common was a late announcement to ACL. Mexican guitar duo Rodrigo y Gabriela were slated to perform, but cancelled the week before. A number of people, then, were probably expecting R&G on the stage, when out popped Common. There were other gospel, R&B, and soul acts performing at ACL, but it was great of the organizers to bring in the intelligent hip-hop sound.

Common brought along a DJ, a drummer, and a keyboard player. The “band” hip-hop feel, a la the Roots, probably won over a lot of the crowd from the start. But it was Common’s smooth, slick lyrical flow that endeared the crowd to him. Performing songs like “Black Maybe”, “Drivin’ Me Wild” (with Lily Allen samples in the background), and “Go”, Common was in charge, commanding respect from the overflowing crowd at the Dell stage. Even my bro, who has little history with the rap/hip-hop genre, was converted.

Here he is rockin’ da (mostly) white folks with “The Light”…

Lucinda Williams – My intention going in to the festival was to enjoy Lucinda way up close, but as we found out quickly, ACL has a way of scheduling your time for you, rather than the other way around. So, while we caught a good part of Lucinda’s set, it was from far back in the grass, closer to the nearest beer tent than to the stage. We heard some good ones. Among them, “Joy”, “Essence” and a cover of the Doors’ “Riders on the Storm”.

Amos Lee – Favorite set of the day went to Philly soul-folkster Amos Lee. My whole family has loved “Arms of a Woman” ever since I snuck it on to a Wiggles CD (along with Metallica’s “Whiskey in the Jar”- get’ em started young) a couple years ago. It’s the perfectly crafted, perfectly sung, soulful love song. Like Amos Lee himself, the song is criminally under appreciated.

I hate to be an advocate for the placement of a song in a commercial, movie, or TV show, but if any song can appeal to a wide demographic of people, this one is it. This one’s a HIT folks! 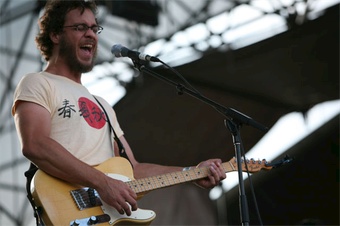 From the moment Amos came out on stage with his Fender and went into “Dreamin”, the crowd was his. There is no other reaction than to be awed when you get to experience a voice like this live. The mainstream/ MTV / popular radio world seems so distant, otherworldly, and laughable when you hear a person like Amos sing. Effortless, smooth, and heavenly, quite frankly. For me, he’s on the same level as a Raul Malo: a voice from the gods, yet somehow managing to exist just below the radar.

It really hit home toward the end of the set, when Amos sang a steamy Isley Brothers ballad. The ACL setlist page lists it as “I Wanna Know”, but I think it may have been ” I Wanna Be With You”. Regardless, it transfixed the crowd. After the show, my bro remarked how he didn’t want that song to end.

Amos closed the set with a killer version of “Arms of a Woman”. Here’s a funny “It’s a Small Youtube world” moment: the first Youtube video I found of “Arms of a Woman” was shot directly behind me. I was shooting my own video (it ended up being too large for Youtube). My large melon is the centerpiece of this clip (and a sobering reminder that I’m losing my hair!):

My Morning Jacket – I have to admit my expectations were probably a bit high for this set. I was front and center a couple of years ago at the Henry Fonda Theater in L.A., where MMJ came out and blew the roof off the place. The acoustics were perfect, my positioning was ideal, and I guess I was spoiled. For the ACL set, we were behind the soundboard to the right, and it covered about half of the stage (the sound quality could have been better too).

MMJ is definitely an entertaining bunch. This set featured a beach backdrop, the band decked out in tropical beachwear (including a long blonde wig on lead singer / guitarist Jim James), a metal detector guy roaming the stage for the whole set, and a half dozen hula girls holding pineapples. Sure, it was funny and different, but unnecessary, I thought. Maybe it was just me, but I found that it distracted from the music. But that’s not to say it wasn’t enjoyable. Andrew Bird joined in for a great version of “Golden”, a beautiful acoustic MMJ tune. They played some off their most recent studio release, Z. And the highlight for me: the majestic rocker “One Big Holiday”.

Wilco – I had only one gripe about ACL: My Morning Jacket and Wilco came on at the same time. Our decision was to start with MMJ and catch the last portion of Wilco’s set.

As we walked up to Wilco’s set, and heard them wrapping up “I’m the Man Who Loves You”, I immediately regretted not devoting all of my time to them. Live and learn I guess.

We saw the last few songs, which reached back to A.M. and Being There: “Red Eyed & Blue”, “I Got You”, “Casino Queen”, and “Outtasite (Outta Mind)”. I can’t get enough of Tweedy, Cline and the boys, and look forward to their return to the Arizona desert.

Bob Dylan – As the festival headliner, Bob was the last one to go on. We made an attempt to get somewhat close to the stage, but found very quickly that it was futile to try. Tens of thousands of people were jockeying for a decent position to check out the legend. So we settled for a couple football fields back, and hoped to at least check out the large stage video screens. Well, guess what Bob didn’t allow for his set? Close-ups.

So as “Rainy Day Women..” kicked in from a distance, and I mean a distance, and all we could see on the giant screens was a distant shot of the stage. We gave it a few verses and called it a festival.

Wrapup: More than a week has passed since the festival wrapped up, and I still have that “post-good time” depression that we experience from time to time.

ACL was the one of the most well organized, seamless festivals I’ve ever attended.

I already miss the experience. If you love music, add this to your list of things to do before you move on to the great festival in the sky. Or if you’re like me, join me every year for the foreseeable future!

Thanks again ACL and Austin, Texas. See ya next year.