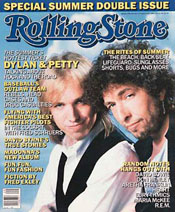 As promised, here’s the second part of this nice collection of tunes from the July 4th, Dylan/Petty show way back in old ’86. An interesting note about “Rainy Day Women” – Howie Epstein plays slide guitar, and Mr. Tom moves over to bass. The last few songs of the night are missing from this collection for some reason (all Bob tunes) – I won’t torture you with what’s missing, I’ll focus on the positive – and that is, the rest of this killer set!

On a Petty side note, did you all hear about the Mudcrutch album and mini-tour? Mudcrutch was Petty’s pre-Heartbreakers band in the early-mid 70’s. They were the house band at Dub’s Diner in Gainesville, Florida before they moved out to Hollywood (into the great wide open). They only released one single, “Depot Street”, in 1975 (on Shelter Records). On April 12th, the original members (Tom Petty, Mike Campbell, Danny Roberts, Benmont Tench and Randall Marsh) will kick off a tour in the non-pretentious little enclave of Malibu, California. An album will follow on April 29th. You can check out the tour dates here (all California, for now). You can check out and pre-order the new album by clicking on the cover…

Enjoy, and make sure to check out Part One if you haven’t already.

Boss: "Something" in Columbus