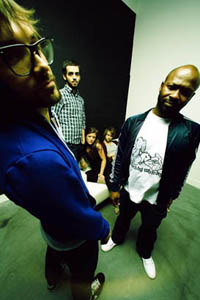 Here’s a nice one that came through the inbox recently. The Heavy hails from a small town outside Bath, England called Noid. Their U.S. debut, Great Vengeance and Furious Fire, will be released on April 8th. In the meantime, you can preview one of their funk-rock hybrids here. It sounds like they went with the Spinal Tap technique and turned their amps up to 11 in the studio. Funky horns, bangin’ drums, and what could pass as a jet engine backing them up.