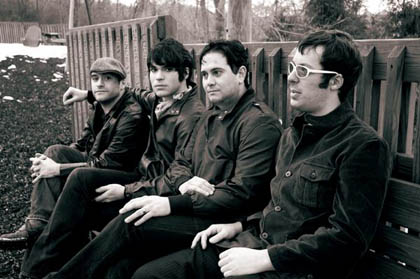 Some time last year, I got a random MySpace message asking me to check out Derek White’s music page. Since then, I’ve been anticipating this album’s release, and I’m not disappointed. They’ve also employed a great distribution model: starting on March 1st, you can download the album via their website for $9.99; purchase of the mp3 automatically gets you a hard copy of the disc when it’s ready next month. So you get the immediacy of digital music, with the promise of a little something to wiggle into your music shelf between Barry White and the White Stripes. The download also has a handful of tracks that didn’t make the cut for the disc. Score!

Derek White and the Monophobics are a four piece hailing from my hometown of Pittsburgh, and present a very polished, pop-oriented approach to their songwriting (I’m thinking Beach Boys). They’re concise, catchy, well-produced and exquisitely executed. Echoes of Brian Wilson are all over the place here. This song is a little edgier than the others, but is also my favorite from the album (and the first track that I heard on their myspace page all those months ago. Check it out:

Derek White and the Monophobics (MySpace)
Purchase the self-titled album