Patterson Hood Guest DJs on E Street Radio (Sirius)
Fri 4/11 4:00 pm ET
Patterson Hood of the Drive-By Truckers gets to share his love of all things Springsteen with an hour as guest DJ. You’ll hear how he tricked his parents and snuck out to see his first Bruce show – a small act of teenage defiance that changed his entire life. 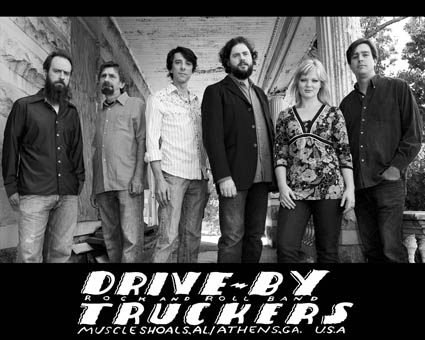 Drive-by Truckers (DBT) are mostly known for their great live shows and categorized in the ‘southern rock’ genre. Over the past few years, though, they haven’t exactly acted like your standard ‘southern rock’ band.

album, which was nominated for a Grammy in the Best Contemporary Blues Album category (the award went to Eric Clapton). This year, Brighter Than Creation’s Dark (New West, 2008) received 4 stars, and much praise, from Rolling Stone, amongst many others, but is also featured on CMT. Their previous album, A Blessing and a Curse (2006), had elements of early 70s rock, showing influences like Faces & the Rolling Stones.

There are actually a few different types of DBT songs; on most albums at least three band members have contributed songs, but most come from front man Patterson Hood and his ‘partner in crime’, Mike Cooley.

Patterson Hood churns out mostly first person songs spanning a wide array of topics. His songs define DBT more than Cooley’s as he simply has more of them. These songs usually involve his icons: blue-collar folk anywhere, desperate people ‘on the edge’, or his family, including a grandfather who served at Iwo Jima, or his mom and her truck driving second husband, Chester. Patterson’s songs get up close and sometimes uncomfortably personal! After a couple of Patterson’s tales, Mike Cooley provides a refreshing counterpoint.

Mike Cooley writes mostly third person songs that display his quirky sense of humor and economy with words. Rare is the Cooley song with only one meaning; subtlety and double entendres abound. One Ickmusic Friday Five™ contributor likened Cooley to Dylan! Let’s see – here’s one example:

“Dreams are given to you when you’re young enough to dream them
before they can do you any harm.
They don’t start to hurt, until you try to hold on to them after seeing how they really are.”
-Mike Cooley

The fact that Hood and Cooley’s often quite serious songs are performed over a wall of snarling guitars, or in a live setting after both audience and band have consumed far too much booze, seems like another contradiction. I view it as the embodiment of a key paradox the band cultivates: on the surface they may seem like a bunch of drunken thugs belting out typical rock anthems; look closer and you may find political sentiment, complex characters, (some) big words or big ideas. The point is that without a closer look you’d write them off as another ‘southern rock’ band, much like if you were walking down the street you’d likely never notice the beaten down, overlooked characters in some of their songs.

Brighter than Creation’s Dark is notable for some old, er, new additions to the band. John Neff adds tasty pedal steel and guitar licks to just about every song. Neff, recently listed as #10 on the Atlanta Journal-Constitution’s list of “Georgia’s Real Guitar Heroes” (a list that starts with Duane Allman), has contributed to several DBT albums, including the very first, but only recently became an “official” band member. Legendary keyboardist/producer Spooner Oldham (Neil Young, others) sits in for the majority of the tracks and the interplay between Neff and Oldham has been a highlight for many reviewers. Bassist Shonna Tucker contributes her first three songs to the DBT catalogue and sings some great harmony in addition to her role on bass.

MY take on the new album: I really like it. It sprawls a bit and covers a lot of ground. The majority of the album, including most of the ‘A’ list songs, is rock, but with a serious nod to old country, a blues tune, and about as close as DBT has gotten to a ‘mainstream rock’ song in “The Home Front”. It was recorded with vinyl specifically in mind, and I look forward to hearing the LP. I was going to pick up the CD, but thanks to the border the band wasn’t able to sell any merch when they came to Toronto last month. I have heard it via my iPod only.

The Drive-By Truckers are on a World Tour. The opening bands they travel with are amazing. Check them out if at all possible.

In addition to guest DJ-ing on E Street Radio, Patterson did a set of Springsteen covers, all from Darkness on the Edge of Town, at a benefit show in Athens last December. Check it out on Southern Shelter (awesome blog by the way).