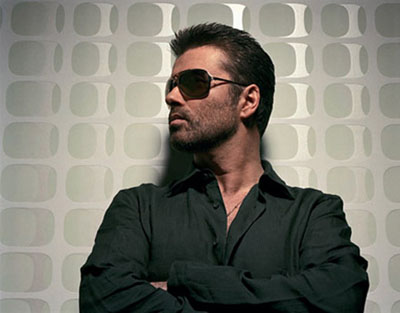 You know what’s entertaining to me? The looks I got from people over the last couple of months – some of them close friends of mine – when they found out I was going to see George Michael in concert. Say what you will friends, but like a lot of people, George’s music has been a part of my life for over 20 years.

Thinking back, I was never a huge fan of the Wham! stuff. It wasn’t until 1987, when George released Faith, that I would call myself a fan. Four words reeled me in: I – Want – Your – Sex. 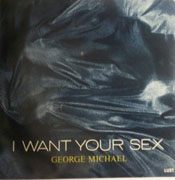 Ahem. Moving on. So “I Want Your Sex” reeled me in, and when Faith was released later that fall, I snatched it right up. Talk about your 80’s classics: “Faith”, “Father Figure”, “One More Try”, “Kissing a Fool”… I was never crazy about “Monkey” or “Hard Day”, but they too were big hits.

So based on this album alone, you bet your bum I was going to the show.

On Sunday night, my wife and I walked down to the floor of the U.S. Airways Center and seated ourselves dead center, about 50 feet from the stage (looking upward, we were directly under the Phoenix Suns center court scoreboard). We had some time to take in the atmosphere. The crowd was mostly older, mid-30’s and up, mostly. White folks, black folks, Asians and Hispanic. Straight couples, gay & lesbian couples, a few packs of cougars scattered about – pounding their cocktails, chattering in their cougar-like ways. Naughty ladies.

At 8:40, the classical pre-show music was kicked up a few notches, and the lights dimmed [By the way, who knows the piece that was played right before the show started?].

“Waiting (Reprise)” started, George started to sing from backstage, and the giant behemoth of a video screen (Giant Screen, I’ll call him) – with his two smaller but sizable cousins on either side – came to life. “I am about to be ENTERTAINED”, I thought. 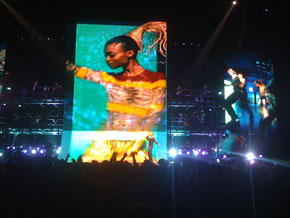 Giant Screen was about 20 feet wide, spanning from the floor of center stage all the way up to the arena rafters. Throughout the show, Giant Screen and his two cousins flashed classic-era GM footage, scenes from his music videos (Naomi Campbell and Cindy Crawford the size of a small buildings? Yes please.); wacked out, ecstacy-induced patterns, serene dreamscapes, and just some of the coolest graphics I’ve ever seen. George was the star of the show, but Giant Screen was a close second.

Adding to the slickness of the stage set up were three tiers on either side of Giant Screen that housed the band for the evening. Lower tier: two keyboard / synth players. Middle: drums and bass on the left, and a sick percussion setup on the right. Top tier: electric and acoustic guitarists and woodwinds. The whole setup was about symmetry – and to top it all off, there were three backup singers on each side; each singer had a mirror image on the other side. Two plus size singers, two hotties (twins, it turned out), and two muscular bald guys. Really slick…

Then there was of course the main event himself: George Michael. Sporting the trademark stubble, hipster shades, and dark coat & pants, George endeared himself to the crowd immediately. He was as gracious as could be, thanking those of us who stuck by him for the last 25 years. Just a few days shy of his 45th birthday (June 25th), he had the energy of someone half his age, working the stage from left to right, encouraging the crowd to clap along, and to get on their feet (which we all were for 90% of the show).

The set list hit all points in his career, spanning from his Wham! and 80’s hits all the way to his more club-friendly fare of the 90’s and 00’s. His newest release is a cover of “Feeling Good”, made popular originally by Nina Simone, and which he performed on the season finale of Eli Stone. On this tour, he performs the tune in true rave-up style, with burlesque dancer Dita Von Teese performing a racy strip tease for the crowd on Giant Screen (thanks again, Giant Screen).

Other moments of the evening that were clicking on all cylinders for me:

– “A Different Corner”, which I’ve mentioned before being my favorite GM song of them all. It was George alone on a tall chair, with Giant Screen matching the melancholy feel of the song.

– A jazzy version of “Roxanne”, in which he brought out a few members of his band to form an instant jazz combo. George introduced the film clips that would accompany the song as some footage shot recently in the red light district of Amsterdam. The final moments showed the “ladies of the night” removing wigs and makeup to reveal who they really were – men.

– A gospel infused arrangement of “One More Try”, which featured George and his six backup singers in a semi-circle.

– “Faith”, which was the opening song of the second set (yes, there was a 20 minute intermission, complete with a clock counting backwards on Giant Screen). The opening organ riff set the crowd off immediately, and had us right back into the show.

– The lush and beautiful “Kissing a Fool” – a jazz-tinged classic from Faith.

If I could change anything about the show, it would be to add one song to the set list – you guessed it – “I Want Your Sex”. The song that reeled me in was notably absent from the evening. It would make the perfect show opener, in my opinion. The blurps and bleeps of the opening synth would be the perfect start. But I’m not complaining.

So is George Michael’s 25 Live tour a nostalgia trip? Partly. And that’s not a bad thing. Music is nostalgia, right? Every song that means something to you is tied in with people, places, events in your life. Even the music we’re digging today will remind us of this time somewhere down the road.

Hearing and seeing George Michael perform the songs that are so much a part of my life (and have been for so long), was something special. And with the negative publicity and poor decisions that have dotted his career, it’s great to see him at the top of his game again. His voice is still great, he’s looking fit and happy, and he’s obviously refreshed and thankful to be where he is today.

The tour is just kicking off. George performs a birthday show Wednesday at the Forum in L.A.,and has several dates following (Ger, let me know how Vancouver is on the 4th of July!). As far as I’m concerned, George Michael is one of the living legends of pop music, and still a top notch showman.

I heartily recommend the ’25 Live’ experience.