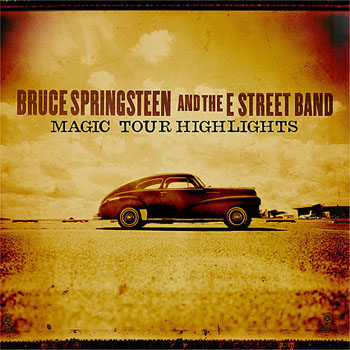 On April 7th, 2008, my wife and I sat in Anaheim’s Honda Center, watching as Bruce Springsteen brought out Tom Morello from Rage Against the Machine to sit in with him and the Band on “The Ghost of Tom Joad”.

Nine minutes later, the crowd was a frenzied, jaw-dropped mass, cheering madly for Tom Morello. The guitar solos that Tom whipped up for the occasion were nothing short of amazing.

Today, everyone else can see and hear what the Honda Center crowd saw, as well as a few other highlights from Bruce’s still-going-strong Magic tour. On iTunes, the tracks are available in both audio and video.

100% of the proceeds go to the Danny Federici Melanoma Fund, in honor and memory of the late E Street-er.

BUY HERE on iTunes or Amazon.