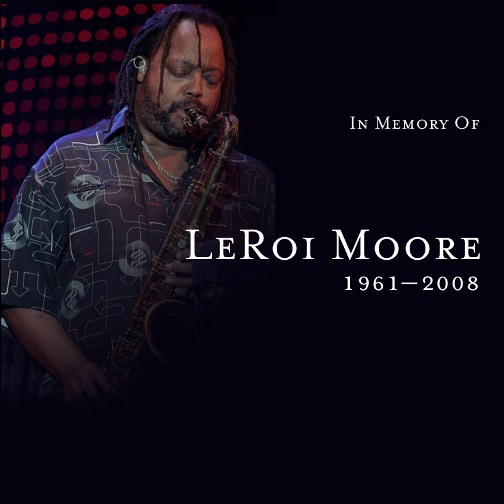 We are deeply saddened that LeRoi Moore, saxophonist and founding member of Dave Matthews Band, died unexpectedly Tuesday afternoon, August 19, 2008, at Hollywood Presbyterian Medical Center in Los Angeles from sudden complications stemming from his June ATV accident on his farm near Charlottesville, Virginia. LeRoi had recently returned to his Los Angeles home to begin an intensive physical rehabilitation program.

On a personal note, I’ve been a fan of the band since ’93 and my wife and I have spent many, many summers with the band and this year was no exception. This is an incredible loss. Our hearts go out to family, the band and friends in this most difficult time…

Tables turned again
And you, my friend
You and I face each other
All time and time out
I know it’s sometimes hard
But knowing just, oh
That we will get along
Until we are old and gray
And huddled up
And doubled up, we’ll sit…
And laugh of times were hard
Laugh of times when we thought all
It would end it all, it’s over
And then again…
And though all I know is this way
And to leave you
Well, I’d die
Oh, my friend
It will be you until the end with me
Always…
Always
Always
Always