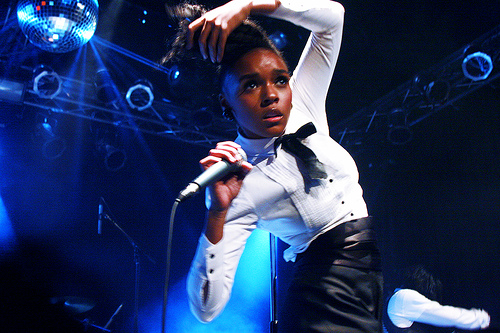 There’s lots of ways to hear about a new artist. Find a cool blog posting. Hear it on the radio. Have a friend tell you about it. Or in this case, have one of your favorite artists wait outside of the Viper Room for the artist’s gig to end so he can talk to her.

Prince drove down the hill to the Sunset Strip last night to meet with Atlanta-based, futuristic R&B singer Janelle Monáe after her gig. E Online found it newsworthy enough to write about it, and I apparently find it newsworthy enough to repeat it here. It’s just that I often wonder what my purple friend is up to. The man still doesn’t have a functional official web site, which is stupefying to me. For all the fuss he makes about people posting his images, songs, and videos on the internet, you’d think that he would have something to offer us. But nope, still zilch on the internet front.

But on to Janelle. The music is unique, fresh, funky, and you can hear influences from Prince to Outkast to smooth singers like Shirley Bassey (she sang some of the James Bond themes). Janelle was recently signed to Diddy’s Bad Boy Records, which is okay as long as he keeps his paws off. I don’t feel like hearing his “yeah”s and “uh”s in her songs.

Janelle’s well on her way to establishing herself as the next best thing on the scene. As usual, I’m a little behind. So thanks Mr. Nelson for swinging by the Viper Room last night. I owe you. No, not actual money. Man, that Prince… always looking for a payday!