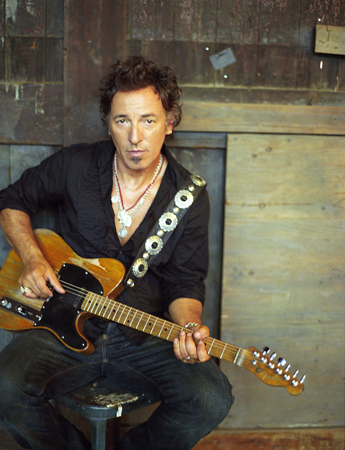 In 1990, Bruce signed up for two intimate shows at L.A.’s Shrine Auditorium to benefit the Christic Institute, along with Jackson Browne and Bonnie Raitt. This here is night two. On night one, he had premiered “Red Headed Woman”, “57 Channels”, “When The Lights Go Out” , and “Real World”. This night saw the debuts of “The Wish” and “Soul Driver”.

It’s pretty hard to describe in words how completely amazing this show is. Bruce is in optimal form. It’s interesting to note the differences between this acoustic show and the Ghost of Tom Joad tour 5 years later. Somewhere in between, Bruce picked up some twang (maybe all those Harley rides out West?). At any rate, I love both sides of the spectrum, but there’s something about this particular sound, this particular performance.

If someone put a gun to my head and forced me to name my favorite Springsteen song, “Brilliant Disguise” would be my reply. And this is the single best performance of the song I have ever heard. All of the heart-wrenching, soul searching doubt about love – bursting from Bruce and his guitar.

And each song is that high in caliber. Bruce pours his heart and soul into each lyric, and each strum of the guitar – something he does on a regular basis with his band. But it seems even more pronounced here. Maybe it’s the moment in time – just a year earlier he had disbanded the E Street Band and moved to L.A. And earlier in the year, he and Patty had their first child, Evan (an experience he details before “My Hometown”).  It’s the Boss, coming out on his own. And he shines.

Intro – “If You’re Moved to Clap Along, Please Don’t”
Brilliant Disguise (mp3)
Darkness on the Edge of Town
Intro – “The address was 39 and a half”
Mansion on the Hill
Intro – “We all live with our illusions”
Reason to Believe
Intro – “You gotta watch those redheads”
Red Headed Woman (mp3)
57 Channels (and Nothing On)
The Wish
Tougher Than The Rest
Tenth Avenue Freeze-Out
Soul Driver
State Trooper

Nighttime Missives with Kings of Leon